Pagani Huayra Roadster – Even lighter than the hard-top Huayra

Drop-top Pagani will borrow technology from outrageous Huayra BC 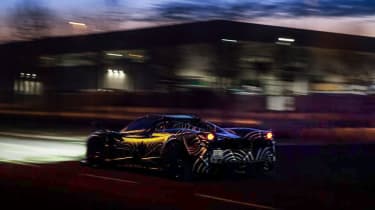 Along with yet another teaser shot of the new Huayra Roadster, Pagani has announced the new drop-top supercar will be lighter than its coupe equivalent.

The hard-top Huayra weighs just 1350kg, this is partly thanks to its tub that’s made from carbonfibre with strands of titanium woven into the fibres. The material is stronger than conventional carbonfibre and is only marginally heavier.

Cars with carbonfibre tubs, like the Huayra, tend not to lose much structural rigidity when converted into open top versions. Pagani’s declaration the Roadster will be even lighter suggests the Huayra’s structure is stiff enough that it hasn’t had to add much bracing, or any at all, to compensate for the lack of roof. 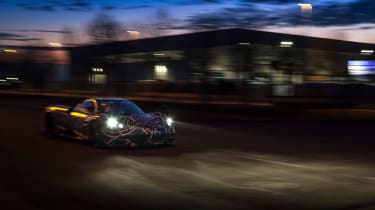 With the previous teaser shot Pagani attached a quote from its founder, Horacio Pagani, that said: ‘We realized the Pagani Huayra BC was an incredible piece of Engineering so all this technology was built into the Pagani Huayra Roadster...’

What this means exactly is unknown. But it clear, even from the cropped and blurred teaser that the Roadster doesn’t have the exuberant aerodynamic additions that grace the BC’s exterior.

> Click here to read our review of the Pagani Huayra BC

The BC is more than just a Huayra with a big wing, though. Its twin turbocharged V12 produces approximately 80bhp more than the standard Huayra, it has Öhlins dampers, improved subframes, a revised e-diff and a new seven-speed single clutch paddle-shift transmission. It could be these mechanical changes that Pagani could transfer onto the Roadster.

With the new car expected to have an even better power-to-weight ratio than the fixed-roof Huayra its performance will be even more impressive. That means a 0-60mph time of less than 3.5sec.

The existing Huayra uses active wings at the front and the back to constantly manage the air passing over the body at speed. Without a roof the Huayra won’t be as aerodynamic, but the active aero may compensate for this and allow the Roadster to reach a similar top speed of over 220mph.

The latest shot of the Huayra Roadster is the sixth shot that Pagani has published on its Facebook page. Like the previous photo it shows the forthcoming Huayra Roadster in its entirety, this time from the rear. Sadly the two images that show the whole car were taken in the dark, half the car is out of focus and it’s covered in a camouflage. Consequently the shot doesn’t reveal exactly what the new car will look like. Pagani has been teasing us with various details of the Huayra Roadster since the start of the year, preparing us for the official unveiling at this year’s Geneva motor show. 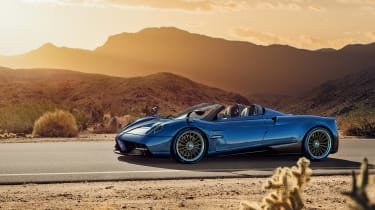 The pervious images only showed us small elements of the Roadster. The last shot gives us a glimpse of the car's intricately detailed engine bay - full, as in existing Huayras, with an AMG-developed 6-litre twin-turbocharged V12. Like the coupe, the Roadster appears to have strengthening elements crossing over the top of the V12, connecting the carbonfibre and titanium woven tub to the rear subframe.

A previous image showed one of the car's taillights - which, as per the coupe, sit proud of the rear deck with a trio of light elements. It features the same camouflage pattern over the bodywork as the earlier teasers. 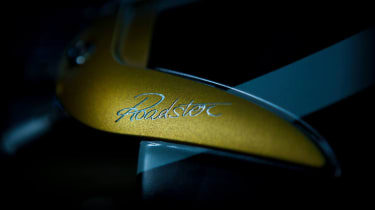 The other two teaser images don’t show a great deal, revealing very little about the way the drop top might integrate into the flowing lines of the Huayra. Pagani has revealed a quote from the company's founder, Horacio Pagani, describing the new roadster as 'the most complicated project we have ever undertaken'.

> Click here to read our review of the Pagani Huayra

The first image released shows the nose of the new car covered in a garish pattern to camouflage its shape, but the close crop means that nothing noteworthy is visible. The second image shows a boomerang-shaped bronze detail with the word ‘Roadster’ carved into it. Exactly which part of the car the second image shows isn’t clear as the shape doesn’t look like any aspect of the standard Huayra, but we suspect it might be the top of the B-pillar and leading edge of the roof.

Removing the roof from any car adds complications, and complications cost money. The standard Huayra costs over £1million once you’ve taken into account local taxes, so the Roadster will almost certainly top that. 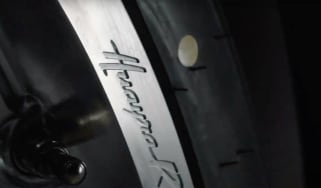