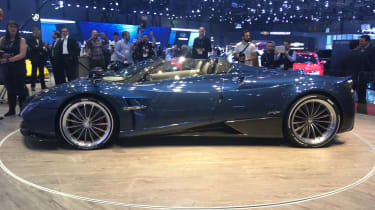 Six years after launching the Huayra hypercar, Pagani launched its new Huayra Roadster at the Geneva Motor Show. It launches with a substantial set of upgrades over the hardtop coupe model just as Horacio Pagani himself promised in a series of tantalising Tweets - including a more powerful V12 engine, wilder styling, and a revised gearbox.

Pagani hasn’t simply removed the roof from the Huayra to create the Roadster, instead upgrading almost every element of its AMG-engined hypercar, as well as opening up the interior to the elements.

> Read our review of the Pagani Huayra BC here

Perhaps most surprisingly, the Roadster actually represents an 80kg weight saving over the coupe, achieved through the refinement of its Carbo-Titanium tub and a significant 25% weight reduction in the glorious forged suspension. As such the new Roadster should outperform its hardtop sibling whilst dramatically improving on its posing ability.

Featuring an uprated version of the Mercedes-AMG sourced M158 V12 bi-turbo engine, the Huayra Roadster produces 753bhp and ‘over’ 738lb ft of torque, with the turbos re-engineered to provide more immediate throttle response while dry sump lubrication should keep the motor responsive even under extreme lateral loads. 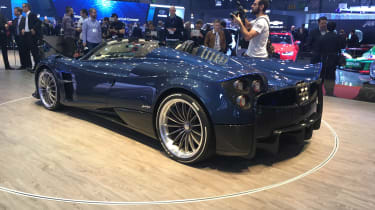 Pagani has paired their upgraded engine to a new X-Trac developed 7-speed automated manual gearbox, improving refinement and response, while still undercutting an equivalent dual clutch gearbox in weight by as much as forty percent. Pagani says that this is the ideal solution for the Roadster, especially as it was the will of Mr Pagani himself for the Roadster to undercut the coupe’s kerb weight.

Featuring two different roof systems, the carbonfibre and glass hardtop is supplemented by a folding fabric soft roof, which can be stored in the car to ensure a passing rainstorm doesn’t soil the glorious interior. Speaking of which, Pagani has largely left the interior intact, although a notable change is the inclusion of a red starter button in place of the previous Huayra shaped keyhole, which incidentally made it look like a tiny Pagani had crashed into your dashboard.

The Pagani Huayra Roadster is priced from €2.28 million (or around £2m), but even if you have a spare few million lying around you are too late as all 100 Roadsters have already been sold. Customer deliveries are expected to kick off later this year. 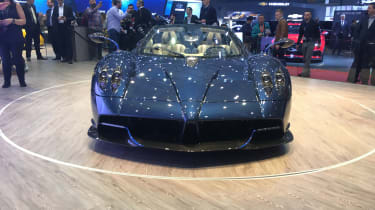 Alongside the model on display in Geneva, the Huayra roadster has been launched online as an interactive 3D model. ZeroLight, who specialise in recreating cars in digital models, has created a platform that reveals a highly detailed digital version of the Roadster.

The microsite where the digital car has been revealed doesn't just allow people to see the Pagani in detail, but potential customers and fans will be able to configure the car immediately. There's a choice of exterior and interior colours as well as different trim options and wheels. Once you’ve selected your perfect Huayra Roadster you’ll then be able to download and share videos and stills of your creation.

The site will only be available for a limited time, and will only be live for the time the Roadster will be on display at Geneva. But with the show open for over a week that should give you long enough to decide on your favourite colour combination, unless you’re particularly indecisive. You can see the digital reveal here: pagani.zerolight.com