What happens when a Pagani Zonda gets crashed? The rumour mill goes into overdrive, that's what 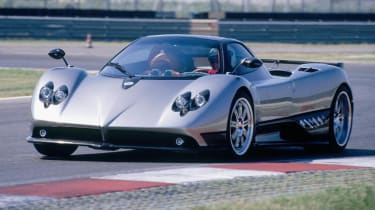 A Pagani Zonda gets crashed, an insurance company is left with a big bill and the rumour mill goes into overdrive. Jackie Stewart has been forced to deny that he wasn’t driving when the accident occurred near Aberdeen last September, after a local paper claimed he was at the wheel. Nor was it our own Harry Metcalfe’s car. Nor was it the ‘UK’s biggest ever car insurance claim’ as was widely reported.

Who gains out of all this? Not the poor sap who was driving, but his insurance company, Aviva, who have got loads of free publicity as the news went viral. The facts are rather hazy for obvious reasons. We believe the car was owned by a dealer and was being taken for a test drive when the bloke at the wheel lost control, clobbering a telegraph pole and punching a hole in a hedge.

So the Zonda goes back to Modena for a patch up and Aviva gets landed with a big bill though not, we believe, as big as the bills for the two Bugatti Veyron’s that have been crashed in the UK. But not into each other. That’s how rumours start.Want more crashed stuff?This Pagani accident was in Hong KongThe Italian cops binned their own GallardoThis was the ex-press Murcielago SVEvo crashes three Ferraris and a Bugatti