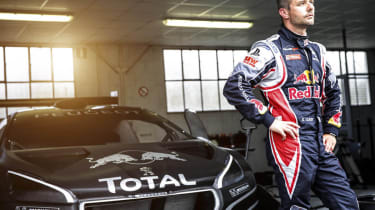 Sebastien Loeb’s Pikes Peak Peugeot is nearly ready. The World Rally Championship’s winningest driver will aim for outright victory next month in a 208 T16, and he’s been behind the wheel driving his latest car – from the sister manufacturer of the WRC Citroen DS3 he’s driving part time in 2013 – for the first time.

It’s a long time since Peugeot attacked the Colorado hill climb, but it is well equipped to do so. The Red Bull-backed 208 T16 - which boasts a central driving position - will compete in the Unlimited class with a power-to-weight ratio twice as large as the Bugatti Veyron’s, an 875bhp 3.2-litre twin-turbo V6 engine combining with an 875kg kerb weight to propel the mega-hatch from 0-62mph in 1.8sec, with 0-124mph taking 4.8sec and 149mph reached in 7sec dead.

And nine-time World Rally champ Loeb heaped praise on the T16 (albeit through an official Peugeot press release). ‘I’ve never driven anything that accelerates so fast! In the lower gears, a Formula 1 car doesn’t deliver maximum power. With the Peugeot, though, it’s bang, bang, bang as you move up the box from standstill. Due to its four-wheel-drive transmission and turbocharged engine, its pull-away performance is phenomenal! You find yourself in sixth gear at 150mph in no time at all!’

More pictures and details of the Pikes Peak 208 T16