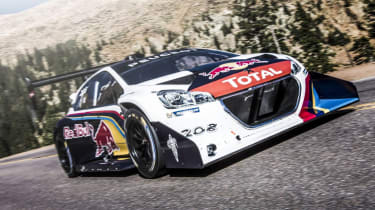 The Peugeot 208 T16 Pikes Peak he piloted ran first in the Unlimited class after the two-wheeled runners had attacked the mountain. However, after a number of delays the team began to fear inclement weather, even the world’s most successful rally driver. ‘When I was on the start line waiting to go, I could actually see the clouds closing in at the top of the mountain’, said Loeb. ‘I remember thinking that if we didn’t get going soon, it would be really difficult.’

Once the 875bhp T16 was unleashed though, it set about destroying the record on the 12.42-mile, 156-corner trail, with an eventual time of 8m13.878s being over a second better than the ‘perfect time’ Peugeot Sport had predicted.

Loeb was predictably pleased with the result. ‘I’m really happy as that was a very good run in the end,’ the World Champion commented. ‘Before the start I didn’t really know if I should push absolutely to the maximum or if I should just push to a comfortable pace, in order to make sure of the victory. In the end, I decided to push to the limit.’ Good man.

The other runners in the class were almost in a second race, such was the effort Peugeot Sport put into the car and this event. Loeb didn’t report any significant moments and the car has been reliable throughout its time in America. The second-placed runner and the man Loeb stole the record from was Rhys Millen in an all-new Hyundai RMR PM580-T. Millen beat his own record, set in 2012, by over 40 seconds, yet still finished a massive 49 seconds behind the 208 T16 with a time of 9m02.192s.

The question now is whether this is the start of a new era for the famous hill climb, with Peugeot Sport proving what can be done with a high level of time and money invested in a project like this. Whilst a new dawn of manufacturers spending on technological developments for this event is possible, it could raise the performance and financial bar above that of the privateer teams, which are the backbone of Pikes Peak. However, whatever unfolds over the next year and beyond will be fascinating and could take Pikes Peak to a whole new (and previously unthinkable) level of competition and performance.