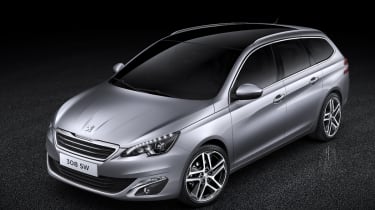 Peugeot has revealed the first details of the new 308 SW, the estate version of Peugeot’s five-door hatchback. The new model is expected to make its debut at the Geneva motor show in March.

The new model enters what is currently a well catered for small estate segment, directly rivaling the Ford Focus, Renault Megane, SEAT Leon ST and Volkswagen Golf estate. Peugeot says the 308 will offer a class-leading load bay thanks to the 330mm increase in length. It has a load capacity of 610 litres making it one of the biggest estates in its class, although there’s no figure on the load capacity with the rear seats folded flat.

Other than the extended rear end, the Peugeot 308 SW also has the option of a full-length panoramic sunroof. Based on the same EMP2 platform as the hatchback, even retaining the same wheelbase, the new SW sheds 140kg of weight over the outgoing model, helping with performance and efficiency.

Thanks to Peugeot’s new BlueHDI 1.6-litre engine, which is also found in the standard hatch, the model cleanest model boasts a CO2 figure of just 85g/km. The rest of the hatchback’s engine options will be offered in the SW, with the quickest models getting the 156bhp 1.6-litre petrol engine.

Specification and trim levels will remain the same, starting with the most basic Access and Active models, with the Allure and Feline versions offering the most desirable equipment levels. UK prices have yet to be announced, but expect a starting price of around £16,000.