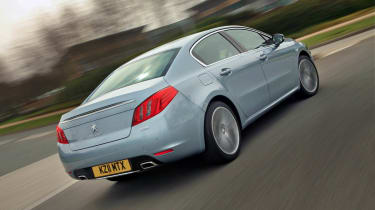 While that range-topping GT that impressed us gets double-wishbone suspension up front, this higher-volume version, like the rest of the 508 range, has a less-sophisticated MacPherson-strut set-up. However, there is a six-speed manual gearbox – most other diesel 508s have just two pedals in the footwell.

While 60bhp shy of the more sophisticated GT, this could well be just as much of a driver’s choice thanks to its availability with a manual. The throw of the gearlever is short and the changes precise, and though the GT has a slightly keener turn in and obvious power benefits, its uninvolving gearbox will be a turn-off for some.

The 508’s ride impresses on all models, being as supple and compliant as most big French cars, but with welcome tautness when cornering. And while the electro-hydraulic steering may lack genuine feedback, it is superbly weighted compared to the pure electric systems of most rivals.

The car cruises effortlessly and quietly on the motorway, but is entirely within its comfort zone when a more demanding road approaches.

It’s up near the top of its class for dynamic ability, though still behind the Ford Mondeo and BMW 3-series. It’s well equipped and impressively screwed together inside, feeling on a par with Audi for quality. An equivalent Mondeo is £1K cheaper, but the Peugeot’s lower emissions (125 v 139g/km) see it a tax band lower and cheaper for company car users, too.

The entry-level 508 gets an ultra-efficient 1.6-litre diesel and an automated manual gearbox, yielding lower CO2 emissions still (109g/km). Its stop-start system isn’t the smoothest, the engine struggles a tad with the 508’s size and the gearbox takes some getting used to. We’d pay more money and get the more pleasant and useable 2.0 HDi.