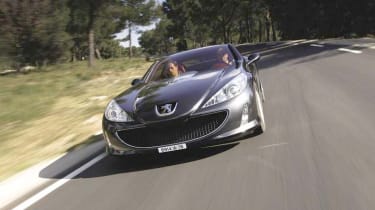 Scene one: Paris show, 2004. Centrepiece of Peugeot's stand is an extraordinary coupe with a long bonnet, a panoramic windscreen stretching back to become the roof, and 12 machined-aluminium intake trumpets each with its own throttle. But surely it's on the wrong stand: this is more Ferrari than even a modern-day Ferrari is, what with those 275 GTB hindquarters and triple-louvre vents.

Then you get the joke. Peugeot's 407 saloon already has the supercar front: a broad, low, leering grin. Now that snout, suitably exaggerated, finds itself fronting a car with the rest of a body to match and named 907. But it's just a stunt; the 907 may have two 3-litre Peugeot V6s spliced together with a double-length, specially-machined crankshaft, but it can't possibly work. Can it?

Scene two: the open ground just outside the entrance to the Paul Ricard circuit. The 907 is idling impatiently, British-made Pectel engine management fumbling to make sense of 12 busy cylinders.

So it does work, judging by the sound and the heady mix of part-burnt hydrocarbons spitting out of the pairs of exhaust pipes just behind each front wheel. We open the bonnet: bits of sand and track debris litter the engine bay and the bonnet's inner panels, because not only does the 907 work, it has worked hard.

How hard? Demo rides at the Bologna motor show and 155mph at the French motor industry's Mortefontaine test track. The 907's creator, Peugeot designer Jean-Christophe Bolle-Reddat, reckons it's good for 180mph, and has had it in a wind tunnel to check it would stay reasonably stuck to the ground. There's a diffuser under the rear deck, and what looks like a movable rear spoiler although it doesn't actually move. Like several other parts of the 907, it's work in progress.

Some more statistics. Usually, a concept supercar's engine exists at best in a computer simulation, more likely in a designer's head. But this one is real, and delivers 500bhp and 443lb ft of torque, all sent through a rear-mounted Sadev racing transaxle with six sequential speeds and dog-clutch engagement. Given the 907's estimated weight of 1400kg, a 0-60mph time of around 4sec is not unfeasible.

What is Peugeot's plan here? Is it going to make more 907s? Maybe a racing version for the FIA GT class where it could compete with Vipers, Corvettes and the Ferrari Maranellos whose visuals it salutes?