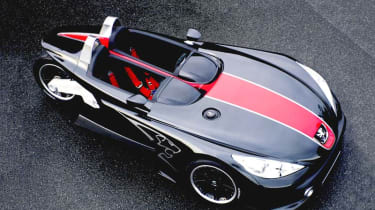 Could it be the next small thing? Peugeot revealed this mad mutant three-wheeled half-a-207 at last September's Frankfurt show. Then VW built something remarkably similar for the LA show in January, no doubt banking on the fact that not many LA showgoers would have been in Germany a few months earlier. Imitation, flattery, sincerity?

And now Jean-Christophe Bolle-Reddat, creator of the Peugeot 20Cup (for that is its name), not only plans to take his toy out on the road sometime, as he did with his V12-engined 907 concept, but even likes the idea of a 20Cup race series along the lines of the races for the little mid-engined RC coupes. They, too, started out as a pair of concept cars.

There's no longer a pair of 20Cups, though. The white one got crunched at the Mortefontaine test track near Paris, and may not drive again. The black one is alive and well, however. And we've driven it.

On one level, the 20Cup is a bit of fun, a half-car with a hint of motorbike and a spectacle of total surrealism as it heads towards you and begins to turn. Where is the rest of it? I'm reminded of A View to a Kill, the Bond film featuring half a Renault 11.

On the next level, it reveals to the public the face, albeit hand-formed in carbonfibre, of the upcoming Peugeot 207 supermini, complete with smiling grille and slanty headlights. And on the third level, this proper, working concept car is powered by the hottest version of the 207's eventual engine range, a joint venture with BMW, also destined for the next-generation Mini.

It's a 1.6-litre, 168bhp, direct-injection petrol unit with a twin-scroll turbo (less lag thanks to no exhaust-pulse interference between cylinders), a self-regulating oil pump and a clutch-controlled water pump. With all that power, plus 177lb ft of torque from 1400 to 4000rpm, the sub-500kg 20Cup should be quite rapid.

It's raining here at Mortefontaine, so the racing tyres are wet-weather ones. The rear wheel is vast - it came from a Le Mans racer - and it sits between a pair of motorbike-like swinging arms, damped by a single