Peugeot has unveiled pictures of the new 2008 rally car, which it will use to enter the Dakar Rally next year. Details and pictures here 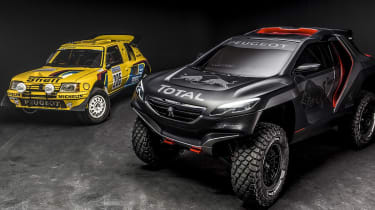 Peugeot has unveiled its new 2015 Dakar challenger and it looks absolutely corking. Called the 2008 DKR (referencing the 2008 road car that it is very loosely inspired by) it will tackle the South American race in January next year with Carlos Sainz and Cyril Despres piloting a car each. Sainz won the event in 2010 with VW, while Despres has five Dakar victories to his name, but all of them on bikes (2005, 2007, 2010, 2012 and 2013).

Although in recent times a four-wheel drive vehicle has always won the Dakar, Peugeot has elected to go down the two-wheel drive route with the 2008 DKR. The regulations allow both more suspension travel and also larger wheels (the tyres on this are a whopping 37inches in diameter) if you go down the RWD route and Peugeot Sport clearly feels that this will outweigh any disadvantages in traction. The decision also may well have been influenced by Sainz, who has spent the last two editions of the Dakar competing in a rear-wheel drive SMG buggy.

No technical details have been released about the engine or other internals yet, but it will be interesting to see what route Peugeot Sport takes. The famous Lion badge obviously has a glorious history in the Dakar (albeit in it Africa rather than South America) having won the rally four years on the trot. Between 1987 and 1990 Peugeot took overall honours, first with the 205 T16 Grand Raid and then the 405 T16 Grand Raid, Ari Vatanen taking three of the wins and Juha Kankkunen the other.

Inevitably there will be speculation that a third driver in the shape of Sébastien Loeb might join Team Peugeot Total next January. Given that the nine-time WRC champion was an interested spectator at the Dakar this year, drove for Peugeot when they smashed the Pikes Peak Record last year and is a Red Bull athlete, it would seem highly likely that he might have a tilt in the 2008 DKR at some point. Only once he’s wrapped up this year’s WTCC championship with Citroen of course…