Is Peugeot's flagship coupe all it's cracked up to be? Ollie Marriage reports on the 197bhp RCZ. 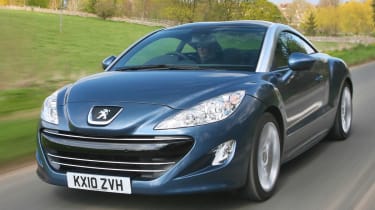 It’s the flagship 197bhp Peugeot RCZ, now on sale in the UK costing a not inconsiderable £25,050. It’s a very handsome thing on the road, even if the front end does have rather a lot in common with the standard 308 CC.

The engine is the obvious one here, so for a change I’d like to talk about the gearbox. Instead of the ponderous, sloppy shift and long, long gearing of the RCZ 156 we drove recently, the 200 has a newly developed six-speed manual gearbox, and it’s really rather good. Nice crisp, short throw lever and well judged gearing.

The damping is particularly impressive – it’s a much tauter car than you might expect, yet still manages to round off bumps rather nicely. The chassis is stiff, the wide track helps minimise bodyroll and around corners its incisive enough to be entertaining. If the roads are wet then understeer will build and it’s here you’ll discover that the RCZ’s tail doesn’t really want to get involved in the cornering process. Even with the traction control turned off (incidentally, it can be fully disabled) the RCZ is a more inert than we’d hoped.

But it is very quick and composed across the ground and although the steering isn’t as sharp as the suspension, neither is it hopelessly disconnected. In fact the whole car feels pretty together.

The Audi TT is the obvious rival here, and the RCZ runs into a few difficulties. It’s not that it’s slower or worse to drive than the £26,475 Audi, because the French coupe is competitive in both areas. But the interior ergonomics let it down. The seats are flat, unsupportive and too high, the switchgear on the centre console can’t be reached unless you lean forward and the build quality isn’t quite there.

I’d also like to throw another rival into the mix – the Renaultsport Megane 250. No, not quite as dramatic to look at, but cheaper (£24,160), faster, and better to drive.

It’s not a hatchback, so practicality is limited. On the plus side the boot is big – far more generously proportioned than the rear seats, in fact.