The Peugeot RCZ R is the firm's most powerful car, and the first Peugeot Sport product since the 205 T16 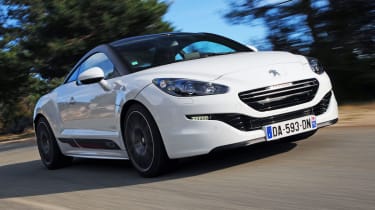 The Peugeot RCZ R, the French firm’s most powerful production car yet. The R has been developed by Peugeot Sport, the first time it has had its mitts on a road car since the 205 T16. A sub-6.0sec 0-60 time and limited 155mph top speed make it the quickest Peugeot by far.

The RCZ R has a turbocharged 1.6-litre engine just like the THP 200 RCZ (the previous range-topper), still driving the front wheels only. However, this new EP6CDTR engine has a reinforced engine block, specific turbo and exhaust manifolds, stronger conrods and new forged pistons developed with Mahle Motorsport (the last 20 Le Mans winners have used Mahle pistons).

All this takes power up to 266bhp at 6000rpm, while 243lb ft of torque is produced from 1900rpm all the way to 5500rpm. Despite this incredibly high specific output (166bhp per litre) and a 0-62mph time of 5.9 seconds, the RCZ R is actually the most efficient model in the petrol RCZ line-up, with impressive claimed figures of 44.8mpg on the combined cycle and 145g/km of CO2 emissions.

The focus hasn’t simply been on the powertrain, however. For a start the front brakes are now huge 380mm discs clamped by Alcon calipers. Ride height is down 10mm, while the suspension is 14 per cent stiffer at the front and 44 per cent firmer at the rear. The wheels are also half an inch wider, while tracks, toe and camber have also been adjusted accordingly. All this is topped off by a Torsen limited-slip diff in the front axle. Serious stuff.

The ride is firm over all road furniture yet pliant enough to retain a readily acceptable level of everyday comfort. Meanwhile, every bump is expertly controlled by the damping, eliminating any trace of bob or bounce as the pace increases and leaving you with a tremendous feeling of control over the RCZ’s actions. The other instantly enjoyable facet in the car is the gearshift: it has a noticeably bulkier feeling, reflective of the increased strength in the internals, but that’s no bad thing and it’s a pleasingly positive action.

The steering tugs a bit under heavy throttle but is nicely accurate the rest of the time with a good weight and rate of response to the wheel. You feel confident chucking the nose at corners seemingly whatever the speed.

The engine is curious in that it initially feels flexible and more than capable of mooching along, pulling smoothly from relatively low revs. However, as you start pushing harder, so it becomes apparent that you really need 4500rpm to get the response you want. This is particularly so through a succession of rapid-fire corners where you are on and off the throttle and want instant bursts of acceleration: it’s no good letting the revs sag to 3000rpm and hoping that the torque will come to your aid. All the more reason to rifle through the gearbox, of course, and if you get the power delivery right then you’ll bring that LSD into play…

If you’re used to non-LSD front-drivers, getting on the power so early in a corner is a curious sensation in the RCZ R. you need to stay with it and not lift off, trusting the front wheels to stay hooked up and not wash into understeer. It’s a wonderful feeling, though, particularly through a long, tightish corner where you get to feel the nose dragging everything behind it on what seems like an ever-tightening radius, the lateral loads building and building until, with all the grip focused on the front, the rear almost starts to feel like it’s oversteering.

The Peugeot’s rear is just mobile enough to let this happen, although with minimal roll and a low centre of gravity, the whole car remains incredibly planted most of the time. Perhaps as a result of this security, the RCZ R never quite feels as engaging and enjoyable as you feel it could be, favouring accuracy ahead of adjustability.

It’s a far more focused car than the regular, £5000 cheaper Peugeot RCZ GT THP 200, though it will be very interesting to try an RCZ R in the UK, because our roads could well prove to be either its uplifting or its undoing.

It’s pricier than the pretty wonderful, 316bhp BMW M135i hot hatch while probably the best front-drive car on sale – the 261bhp Renaultsport Megane 265 Cup – is loads cheaper at £25,545, if a less quality item and more prosaically styled. And if you favour adjustability above all else, don’t forget the £25k Toyota GT86 and Subaru BRZ pairing…

The RCZ received a facelift earlier in 2013 and the only real addition to the R version’s visuals is a fixed rear wing and a smattering of little R badges. This lack of adornment is no bad thing because the standard shape of the RCZ is a thing of beauty. There’s the odd awkward angle if you look hard enough, and like the Audi TT it will fool plenty into thinking it’s mid-engined, but by and large it just looks gorgeous – particularly that molten moulded roof line.