The concept has become a production reality, but is the Peugeot RCZ as good to drive as it is to look at? 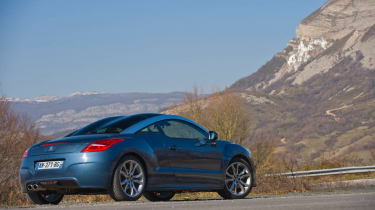 After a decade or so in the wilderness, Peugeot is back on the radar of keen drivers everywhere with the RCZ coupe, a car of exceptional dynamic precision and poise. It’s good to write that. In many ways, the RCZ is Peugeot’s TT, a statement car that shows its design flair and proves that its engineers can conjure engaging, entertaining handling from humble hardware. In this case that’s Peugeot’s ‘Platform 2’, the somewhat underwhelming underpinnings of the 308 range and others.

First shown as a concept car at the 2007 Frankfurt show, the RCZ was given the green light just two years ago, and following an intense development programme is now rolling off the line at the specialist Magna Steyr factory in Graz, Austria. Yet from the moment I walk up to it, key in hand, to when I park it up 150 miles later, hot tyres and pinging exhaust slowly cooling, there’s precious little about the RCZ that seems to have been rushed.

All that distinguishes this 197bhp RCZ from the base models are its inch-bigger 19in alloys. Common to all is the same appealing shape with its low, wide build, aluminium-trimmed roof arches and glossy double-bubble roof that flows into the rear screen. The rear haunches bring to mind VW’s Karmann Ghia, and had the twin tailpipes been positioned centrally there’d have been a strong flavour of Porsche Boxster from dead rear, but there’s no denying this is a distinctive and attractive coupe, Peugeot’s best looking production car for years, in fact.

The interior is stylish too, the delicately chrome-rimmed instruments clear and classy, the dashboard and seats of our test car trimmed in optional leather, while the driving position is well planned, with reach and rake wheel adjustment. Access to the rear isn’t easy but no adult would want to go there anyhow, the seats being tiny and upright and the roof/window-line low despite the bubble shape. Only young kids could be tempted, and I’d guess only for short journeys.

The rather unemotional-sounding ‘Platform 2’ might be there beneath the RCZ but it’s in a much different configuration, with wider wheel tracks (up 44mm front and 63mm rear compared with the 308 hatch), while the coupe’s centre of gravity is some 40mm lower.

Besides the obvious difference in performance, which sees the 0-62mph time drop from the basic petrol car’s 8.0sec to 7.5 and top speed rise from 133 to 147mph, the chassis of the most potent RCZ is also subtly different. There’s an extra brace bar between the lower wishbones of the strut-type front suspension, plus stronger hubs, which together ensure that the suspension geometry remains true even in the hardest cornering. There are also bigger brakes and, on the inside, a smaller diameter, more sculpted, flat-bottom steering wheel. This package of enhancements will also be offered as a ‘sport pack’ on lesser models.

The ride quality on the 19in wheels is remarkably good over a variety of surfaces. What’s especially impressive is how quietly and calmly the suspension rounds off the lumps and divots of a B-road-style back road, bearing out the claims of high structural integrity, and there are more graphic and stimulating demonstrations to come…

In the early miles on the roads of northern Spain, the RCZ feels refined and undemanding, the weighting of the electro-hydraulic assisted steering quite agreeable, the gearshift a little loose in feel but light and accurate enough. The engine is refined and delivers its urge from usefully low revs, getting gradually stronger and more enthusiastic sounding as it gets into the mid-range. There’s a resonator in the exhaust system that adds an appealing twin-cam twang to the note when the turbo is blowing hard.

There are some properly trick elements to this engine too, including a twin-scroll turbo for fast spooling, variable inlet valve lift and variable inlet and exhaust cam timing, plus direct injection. This combination is a first, but the impact is felt less on the road and more in the CO2 figures, the THP 200 returning 159g/km, almost the same as the THP 156. There are occasional, just discernible hesitations in the delivery of our test car, but once we get into the mountains they seem to disappear.

The first time you tack into a corner with some enthusiasm you notice just how cleanly the RCZ turns in and how tenaciously it grips. A couple of hours of brilliant roads behind you, from fast, twisting and flowing, to narrow and lumpy, to climbing switchbacks slick with melt water, nothing has changed; at all speeds and in all conditions the RCZ just grips and turns. And the harder you drive it, the more your respect for its abilities grows.

It doesn’t understeer until you’re goading it mercilessly, and this without any type of limited-slip device between the front wheels, be it mechanical or electronic. Even when you turn the ESP off nothing changes – the threshold is set high. The tail won’t even be loosened if you turn in on the brakes. And while this might sound rather anodyne, uninvolving, it isn’t. The steering has precision and feel and you can guide the RCZ with inch-perfect confidence, the dampers tightly but unfussily controlling wheel movements, strong roll control ensuring that braking melds into turning melds into powering out, creating one fluid manoeuvre.

On our route there is one sensational section of road that seems to go on for 20 minutes, rising and falling, never straight for more than a moment, fast and deserted. The RCZ devours it, and as I sit there, held nicely by the well-shaped seat, it occurs to me that I am testing myself, not the car; testing my ability to read the road and place the car on the perfect line, to smoothly extract as much performance as I can. The car takes it all in its stride; brakes untroubled, tyres squeal-free and, when I check later, no more than lightly buffed. I’d turn around and do it again if I had the time. The only things that seem to wrong-foot the RCZ are sharp transverse ridges and big bumps, which punch through the calm damping to the rather abrupt bump-stops.

Will the £20K entry-level THP 156 be as sure-footed and incisive as the 200? Quite possibly, judging by the other model we try, the 2-litre diesel. The HDi 163 delivers a huge amount of torque, some 250lb ft from just 2000rpm, and revs out to 5000rpm. Compared with most four-cylinder diesels it’s only distantly rattly in the mid-range and smooth and quiet at a cruise, but it’s not nearly as appealing a drive as the THP 200, and not just because it doesn’t feel as sparky.

The weight distribution on the 1297kg THP 200 is 64/36 front/rear, which you’d have to say Peugeot’s chassis engineers have used to the RCZ’s advantage, to nail the nose to the road. On the 1370kg HDi 163 most of the extra weight is in the engine, the distribution goes to 66/34, and you can start to feel it blunting the RCZ’s agility. The steering is a little lighter, the chassis a shade softer, but it still hangs on brilliantly, resists understeer exceptionally well and won’t be flustered, which is why the 154bhp petrol RCZ should be a good steer. However, I fear it won’t feel powerful enough.

With 197bhp and 202lb ft, the RCZ goes just about as fast as you’d like it to and about as fast as its looks suggest it should. For people like us, it’s the optimum model. Dynamically it’s unlike quick, tail-happy Peugeots of the past, but it’s very capable and clean, and surprisingly involving. My only worry is that the appeal of clinical cornering might wane over time.

Is the RCZ the coupe of choice, then? More appealing than the base BMW Z4, Audi TT or VW Scirocco? The Z4 has more character but feels less able, while the 2-litre TT and Scirocco are neat handlers and feistier than their quoted bhp would suggest. It’s a close call, one likely to be decided on looks. An RCZ in black with gloss black wheels would be hard to resist.