It took less than 10 minutes for my opinion of Porsche 911s to change forever. As a teenager who devoured as many car magazines as possible, the inevitability of another 911 group test victory had coloured my view of the 'souped-up Beetle'. I didn't want to like the 911; in fact I had an irrational hatred of them. 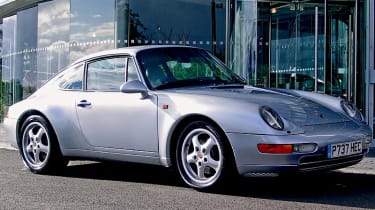 It took less than 10 minutes for my opinion of Porsche 911s to change forever. As a teenager who devoured as many car magazines as possible, the inevitability of another 911 group test victory had coloured my view of the 'souped-up Beetle'. I didn't want to like the 911; in fact I had an irrational hatred of them.

And then I jumped into the passenger seat of a plain 996 Carrera 2, in silver: the epitome of 911 predictability. This was early 2001, and John Barker and I were at Bedford Autodrome, waiting for the night cover shoot (issue 31) to finish. When the cars were finally free we needed to get back to the office in a hurry. John, it turned out, was in even more of a hurry than I'd realised...

So there I was, relieved to be in the warmth of the car and one step closer to home, but mildly alarmed at John's McRae-style commitment.

Slowly the tension dissolved from my clenched fists and knotted stomach and I could feel the 911 working. I remember being dumbstruck by the quality of the damping above everything else, and serenaded by the sweet, mellow howl of the flat-six. From that moment, I knew that one day I just had to have one...

That was four-and-a-half years ago, and as I write this there's a gorgeous 993 Carrera 2 (in silver) parked outside my house. And yes, I'm pretty damned smug about it. Bloody Porsche drivers, eh?

You may have seen the car in last month's cover story, where it snapped at the heels of the new Cayman S. The newer Porsche was more composed and faster across the ground, but the 993 fared remarkably well. Its 3.6-litre flat-six has a fairly unremarkable (by 2005's standards) 285bhp, but it kicks incredibly hard and pushes the narrow-bodied 993 through the air with amazing enthusiasm. In a straight-line drag, the Cayman S couldn't shake it. And what it loses in sheer cross-country pace, the Carrera makes up for with an abundance of character and that unique rear-engined feel.

We weren't planning to buy a 911 (the Mustang has already put an almighty dent in the evo coffers), but when we decided we needed a 993 Carrera to put the Cayman into context, Harry's wallet was persuaded open again. £25K is enough to bag either a clean, privately advertised VarioRam car, or a slightly older 272bhp car from a specialist. We went for the former, simply because we're a sucker for horsepower and we guessed that most of you would do the same.

Harry did most of the chasing and found P737 HEC on Autotrader's website. It was located conveniently near to his home, a VarioRam model with an average 80,000-miles on the clock and it looked bang on the money. Most important of all, it was fitted with the six-speed manual 'box. It's incredible just how many Tiptronic 993s there are cluttering up the classifieds. PHEC ticked nearly all the boxes: only the seriously puny 16-inch wheels and balloon-spec tyres looked a bit suspect...

Harry duly did the deal, knocking the price down to £24,000 when he realised it needed a service and was short on tax. With a set of genuine Porsche 17-inch Cup alloys (£500) bought from specialist Design 911 UK, and some new Bridgestone S-02A rubber (£716.75), we had our perfect 993 Carrera. I'll gloss over the unseemly fight that engulfed the office to determine who was going to run it, but suffice to say I was the last man standing. The bruises are healing nicely, thank you.

So over the last few weeks we've been getting acquainted. My experience of air-cooled 911s is pretty thin and I'll admit I was a little nervous of the 993 to begin with. Jumping into an older 911, you always feel that the rear weight bias is out to get you, even if the reality is rather different. 'Cautious' sums up my approach to the first couple of thousand miles.

First impressions were interesting. The engine felt great, smooth and genuinely grunty, but a little on the quiet side (I think a slightly rortier system might be on the shopping list). But it's the shock of the upright windscreen and incredibly dated interior that really dominates your first few drives in a 993. To think that Porsche built a car with this interior as recently as 1997 is staggering.

Equally surprising is that the 993's steering feel isn't as detailed as either the 996's or 997's. Contemporary reports bemoaned the loss of tactility when Porsche switched to water-cooling, but I think that rose-tinted spectacles must have been the 996 launch blag. There's a rubberiness to the 993's steering at low speeds, and it doesn't relay a great deal of information until you're really leaning on the chassis. Like every 911, it gets better the harder you go, but in recent models steering feel has been impeccable whether crawling through urban hell or blasting down idyllic B-roads. The 993 requires a bit more commitment to reveal its soul.

Now isn't the time to nit-pick, though. This is my first experience of living with a 911 and so far it's been nothing but a delight. I love its fluid curves, its compactness and the fact that it's that little bit older. And when you think that you can buy a 171mph 911 for less than £25K, you can only conclude that the world isn't such a bad place after all...