How does Porsche's Driving Experience Centre rate? We give its YouDrive training course a go 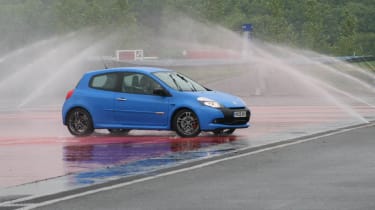 Many a sports car maker offers up its own driver-training courses now. They’re a nice money-spinning aside and a great way to teach owners how not to throw their new purchase into a ditch. Porsche’s Driving Experience Centre at Silverstone offers up a different take on the experience. For starters, each new Porsche gets a session of tuition thrown in with it, and you do more than steer your car around some cones. The Centre is a marvelous place, with some expertly planned courses that demonstrate different levels of grip and various types of road and driving occurrence, but exaggerate the detailing so that high-speed situations can be taught at health-and-safety low speed. That may not sound quite up our street, but it enables a number of people to take part at once and also gives the Centre its enviable record of no crashes or accidents. My visit was for a ‘YouDrive’ day, a lovely Saturday morning in which I took along a car of my choice (my long-term Renaultsport Clio Cup, naturally) to complete low-grip training exercises in before graduating to a Porsche 911 for the B-road aping handling circuit. First up was a classroom theory session, which descended into a rather fun debate between all of the day’s participants about rights and wrongs of driving. It was a great learning tool, though, teaching us much about our strengths and weaknesses. We then all headed to track in our own cars, with instruction via radios. First up was the Kick Plate, which combines sodden track with a violently moving plate, to simulate oversteer and provide a safety-netted chance to learn how to correct it. The rabble of cars around me – 911s, a Smart Brabus Roadster, a Ferrari 355 – all struggled, the smallest of kicks at circa 25mph causing spins and overcorrection aplenty. My Clio? Far easier to collect, its front-wheel-drive and light, precise steering making the activity a piece of cake. Though the Brabus looked to be having more fun… Next up was the Ice Hill, a very wet decline with a slalom set up, again to induce tail-end trickiness. Once again, the Brabus was pirouetting with ease. The Clio could only understeer, its tyres ploughing it straight through the slalom markers and no amount of handbrake, throttle lifts or violent braking bringing out the tail enough to negotiate the course. Next, though, it was 911 time, and my first acquaintance with a rear-engined Porsche at that. The Porsche handling circuit certainly isn’t a high-speed job, but there were long enough straights to begin stretching the legs of the PDK-equipped Carrera I was piloting. It was a fun first drive in a 911, but equally a frustrating taster – after half a dozen laps I was being hauled in for lunch. At £165 for half a day, YouDrive is jolly good value, though. Time in the cars is high thanks to the radio tuition, and spending the day with other like-minded folk is a good way to learn. And it’s a great chance to wander round and marvel at Porsche’s Silverstone facility. Whether you own a Porsche or not, it’s top fun.