evo's Harry Metcalfe rides shotgun in the new Porsche 918 Spyder supercar. What does he reckon? Thoughts, video and pictures here 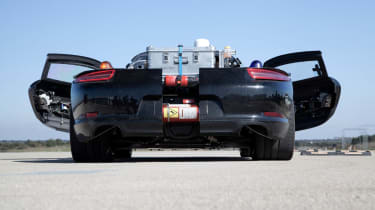 The amazing Porsche 918 looks set to start a brand new chapter in the world of supercar performance when it goes on sale in 2013. Porsche is planning to build just 918 of the mega-fast hybrid, and buyers will have to find £650,000 to get into one. The 918 marks the arrival of a new breed of supercars that not only deliver stunning performance, but also exceptional economy. The 918 uses both a mid-mounted 4.6-litre V8 engine producing 562bhp and a trio of electric motors to deliver a sub-3 second 0-62mph time, a claimed 202mph top speed and yet an average of 94mpg in the official EU fuel test.  Naturally, we were keen to find out more, so when Porsche offered evo a chance for a very early ride in a development car, we jumped at the chance. You can read the full story in issue 169 of issue, on sale 28th March. But to give you a taster of what to expect here’s a short video of evo’s editorial director and founder Harry Metcalfe giving us a quick tour around the only fully working development car.