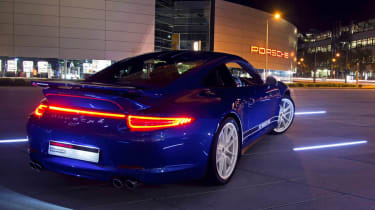 Porsche has unveiled a special edition 911 dedicated to its Facebook fans. It’s the third Porsche that thanks the company’s loyal social media users and marks another milestone of ‘likes’. Porsche has also divulged pictures of the 5M Porsche Fans edition being built.

The kitted out Porsche 911 has been created to celebrate the passing of the 5million fan mark (though Porsche is currently much closer to 6million), and comes little over a year after the Cayman art car that marked 2million fans with a livery that included the face of each of them. In 2011, the 1million milestone was marked with a 911 GT3 Hybrid racing car with 27,000 signatures across its bodywork.

The 5M Porsche Fans 911 is about as fast and plush as a regular, naturally aspirated 911 Carrera can get. It’s a 911 Carrera 4S with optional Powerkit, meaning it boasts peak power of 424bhp and 324lb ft of torque, edging it past a V8-powered Audi R8. It completes 0-60 in little over 4sec and will hit a 191mph top speed.

The Powerkit, which adds 30bhp on top of a standard four-wheel-drive Carrera 4S, also brings with it the Sport Chrono package, a sports exhaust and dynamic engine mounts. The 5M Fans 911 also has a PDK paddleshift gearbox, a pair of rear spoilers (meaning a wing is rather questionably added on top of a glorious ducktail), a bright blue colour scheme and gleaming white alloy wheels. Its key also matches its paintwork…

Previous Facebook edition Porsches have been displayed in the Porsche Museum in Stuttgart, but this 911 will play a more active role. Porsche is running a competition with a drive around its Silverstone experience centre the prize (with the 911 joining Porsche's Silverstone fleet thereafter). To enter, you need to be a Facebook Fan of Porsche and persuade all your friends to join you – the person with the most Porsche-supporting mates gets the drive. With an entry process like that, the 10M Fans edition won’t be too far away.

What should Porsche spec up next for its social media supporters? 918 Spyder? Or something classic – a 959 or Carrera GT, perhaps?