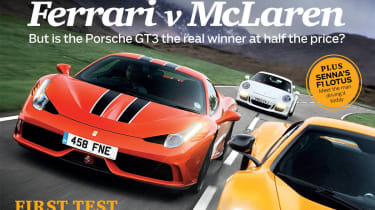 Buy a copy of evo 198 in our online shop

News We see good times ahead for Cosworth and Bentley, while there’s a plethora of new performance VW concepts – some better than others…

LettersA number of you are making noise about cars not making noises the old-fashioned way, while there’s a (dis)honourable mention for the Austin Allegro

Ferrari 458 Speciale v rivalsForget the World Cup, bookies all over the land are fretting about what odds to draw up for eCoty 2014. The result of this group test might give them guidance, as one of the most exciting Ferrari sports cars ever – the 458 Speciale – battles the new McLaren 650S and the freshly fixed Porsche 911 GT3. We’ve a full performance test on the Fezza too…

Morgan v CaterhamThese two cars share just seven wheels and five cylinders. It may not be as glamorous as the story above, but 3 Wheeler v Seven 160 could be just as much fun Goodwood monstersThe return of the Goodwood Members’ Meeting means more relaxed and exclusive access to some truly exceptional racing cars. David Vivian takes advantage

Porsche Boxster GTSSearching for the world’s greatest road in potentially the pick of the Porsche range, Catchpole jets off to the sun

Citroen SMAfter 17 long years, Jethro Bovingdon finally gets to have a proper go in his dad’s Citroen SM. He’d better be complimentary about the Maserati-engined ’70s classic, then

Long-Term testsOur Toyota GT86 makes way for a Kia Ceed (really), while the evo team has a day off away from the office, er, driving cars and swearing at our photographer

evo knowledgeArguably the most resolved car in Aston Martin’s history, the modern-day Vantage can now be bought for Audi TT money. We tell you how and what you should watch out for

Art of SpeedThought the headlights of the Alfa Romeo 4C were unusual? Here’s a closer look at the equivalents from its 1989 forebear, the SZ

Buy a copy of evo 198 in our online shop