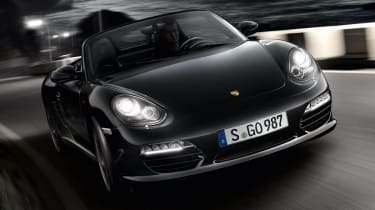 Following on from the Porsche 911 Black Edition comes similarly dark special edition Boxster. However, unlike the 911, the Boxster S version benefits from a power tweak too. It may only be  an extra 10bhp and 7lb ft of torque (to total 316bhp @ 7200rpm and 273lb ft @ 4750rpm), but limited editions always seem so much more worthwhile when they include mechanical upgrades. That’s enough to drop the standard 0-60mph-time by a tenth of a second, to 5.2sec, although if you plan on going drag racing then you’ll do even better by specifying the PDK gearbox and Sports Chrono Pack Plus. This includes launch control and shaves another three tenths, dropping the time below five seconds and into supercar territory. There’s another dynamic change, as the new ten-spoke alloys drop the unsprung weight by a useful 5kg, but most buyers will probably be more concerned by their look and the way they set off all the blackness. Almost everything that could be painted black has been, both inside and out - even the embossed logo on the seats. Also included in the mix are a few items which reside on the option list of regular Boxster S models, such as sat-nav, an uprated sound system, and Bi-Xenon lights with a dynamic cornering function and LED daytime runners.  It all means the increase in price by just over £1600 over the standard Porsche Boxster S is very worthwhile, bringing the list price to £47,426. Porsche will be building 987 examples of this model, which isn’t a random figure - it’s the internal designation number for the Boxster. Read about the Porsche 911 Black Edition here Porsche Boxster Spyder v Ferrari 360 Spider