Faster than ever and still brilliant to drive, but the new turbo engine lacks character 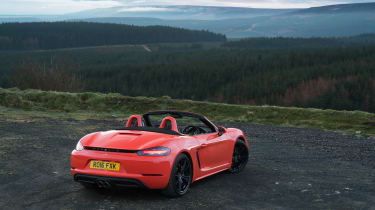 In a fast changing performance car landscape the updated Porsche Boxster gets a new name and an all-new four-cylinder turbo engine. The latest model is now called 718 Boxster – a nod to the 718 racing car of the Fifties and Sixties, which was also powered by a flat-four engine.

The much-loved normally-aspirated flat-sixes of old have been retired, replaced by downsized, turbocharged engines in the pursuit of reduced emissions and improved fuel economy.

The base 718 Boxster gets a 2-litre engine while this S model gets a 2.5-litre unit. Unlike the more expensive 911 Carrera, which was updated at the end of last year with a new turbocharged engine of its own, the 718 uses just one turbocharger. 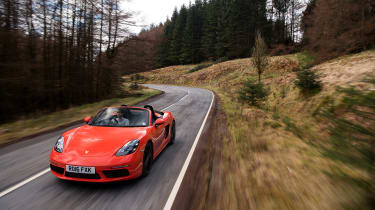 The standard transmission is a six-speed manual gearbox, but buyers can specify a seven-speed PDK twin-clutch unit. A limited-slip differential can be added as part of the Porsche Torque Vectoring package.

Porsche says a 718 Boxster S with PDK will reach 60mph from standstill in four seconds flat, assisted by a launch control system. The manual car records a 4.4sec 0-60mph time. The top speed is 177mph.

In an effort to retain as much of the responsive, free-revving character of the old six-cylinder engines Porsche has incorporated a handful of clever technologies into the new range of four-cylinder units. Dynamic Boost, for instance, leaves the throttle open for up to two seconds after the driver lifts off the throttle pedal, which means boost pressure isn’t dropped. When the driver reapplies the throttle, therefore, there’s no delay as boost builds back up again.

The higher-powered S model uses variable turbine geometry, a technology that has filtered down from the 911 Turbo. This gives the turbocharger the response of a smaller turbo at low engine speeds with the power of a bigger turbo at higher engine speeds.

The previous Boxster’s chassis structure is carried over for this new version, albeit with some important revisions. The rear axle, for example, has been strengthened to increase lateral stability and the more direct steering system from the 911 Turbo has been fitted. The Boxster S now uses the 911 Carrera’s front brakes, with 330mm discs and four-piston callipers, although Porsche Carbon Ceramic Brakes are still available.

A new option is the second-tier Porsche Active Suspension Management system, called PASM sport chassis. The basic PASM option lowers the car by 10mm, but the new sport chassis version lowers it by 20mm to further drop the car’s centre of gravity. Our test car was fitted with this option, as well as ceramic brakes, Porsche Torque Vectoring, a sports exhaust and Sport Chrono, making it the 718 Boxster S in its most focussed form – for the time being at least.

Our car was also fitted with optional 20-inch wheels, which certainly look the part in combination with the 20mm drop in ride height. Impressively, though, ride quality in the softer PASM suspension setting is actually very reasonable. With good storage space between the two boots, a high quality cabin and a fast-operating power hood the 718 is as useable and fuss-free as two-seater sports cars get.

The Sport Chrono kit brings with it a rotary switch on the steering wheel, which allows you to choose between Normal, Sport, Sport Plus and Individual drive modes. In either of the Sport modes the 718 is a deeply impressive sports car, with an expertly judged chassis balance, good pliancy over bumps and rock solid body control.

That was all true of the previous version, too, but with the more direct steering rack, the lower ride height and the latest generation Pirelli P Zero tyres the 718 feels more agile than ever. The stiffer damper mode is worth exploring on the road – so often these firmer settings are really only appropriate for smooth circuits – because having a touch more support at each corner does take away the very small degree of floatiness in the body that can be felt in the softer mode, without completely ruining pliancy over bumps.

Steering feel was not a strength of the previous Boxster and the same is true here. In fact, the steering is exceptionally accurate and it gives a better sense of connection to the front axle than the helm in a 911, but there simply isn’t the granular feel that marked out early Boxsters.

The limited-slip differential gives the car enormous traction away from bends, but with so much more torque than before you can manipulate the attitude of the rear axle using the throttle pedal more readily, particularly in damp conditions, which makes the car really engaging and rewarding.

There is a good deal more to celebrate about the drivetrain, too, such as the sublime gearshift action. The ratios themselves are still very long, but the much stronger mid range means you needn’t hold gears quite so long or relentlessly chase the lowest gear possible, which means you can row through the gears more frequently and enjoy that gearshift action.

Even with the sports exhaust fitted the new engine is fairly characterless in the way it sounds. It doesn’t want for volume at idle and the sound is a dirty, gruff sort of warble with Subaru undertones, but it isn’t tuneful. Unfortunately, it doesn’t improve once on the move and with the roof up it’s actually very droney. The note does harden over the final 1000rpm, but the long and short of it is that the Boxster is no longer a car that can be enjoyed for the way it sounds. 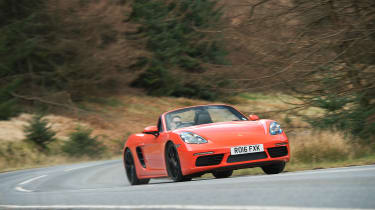 The turbo announces its arrival with a real ferocity at 2800rpm, below which the engine is rather lifeless. This is demonstrably a turbocharged engine, whereas the 911 Carrera’s six-cylinder unit disguises its forced induction very effectively. Once the turbo has spooled up throttle response is brilliantly sharp and there’s such a wide power band that you never find yourself dropping off the turbo. By 6800rpm the engine has begun to run out of puff.

Straight-line performance is stronger than ever, but the intensity and excitement of the old six-cylinders has been lost. Along with the missing soundtrack that means a good chunk of the reason we’ve loved Boxsters for so long has been taken away from us.

The chassis is as rewarding as ever and in purely objective terms this new turbo engine is very impressive, but the overall driving experience is less wholesome now.

For all the misgivings we may have about the four-cylinder engine the Boxster is still the consummate two-seater roadster. Nothing else in the category matches it for driving fun and day-to-day useability: the Alfa Romeo 4C Spyder simply doesn’t have the quality in its chassis and the new Mercedes SLC will have to completely overhaul the dynamics of the outgoing SLK that it’s based upon if it’s to trouble the 718.

The Jaguar F-type V6 S is perhaps the Boxster S’s biggest threat, given that it’s the only rival that makes a priority of on-the-limit driving dynamics.