The Porsche 718 Spyder is a rare gem of a sports car, there is nothing else like it at the price 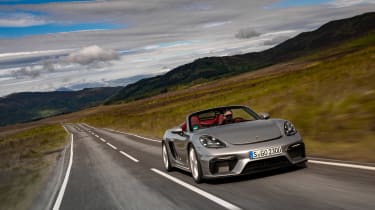 Last time out the Porsche Boxster Spyder was a very different car from the Cayman GT4 on which it wasn’t based. Instead it was basically a restyled Boxster GTS, not that there was a great deal wrong with that. Point is, though, it was nowhere near as focused in its chassis and suspension design as its fixed head brother with the big wing on the back.

This time, however, the 718 Spyder is exactly the same as a GT4 beneath its knee-tremblingly beautiful new skin. Same 4.0-litre flat six 992-based engine that revs to 8000rpm, same six-speed manual gearbox with auto blip on the downshifts and, most important of all, exactly the same GT3-inspired chassis, suspension, steering and brakes.

> Click here for our review of the Porsche 718 Cayman GT4

The only real difference between the Spyder and GT4 this time is the aerodynamic package. On aesthetic grounds Porsche decided not to fit the Spyder with a big rear wing (correct decision) and has instead gone for a smaller wing that retracts back into the rear bodywork at low speeds, plus the front splitter is nowhere near as pronounced. So the Spyder generates no lift as such, but also no downforce. Unlike the GT4.

The flip side is that the Spyder looks drop dead gorgeous in the flesh (as does the GT4 to be fair, though for different reasons) and the hood – still a mostly manual affair, so still a bit of a palaver to raise or lower to be honest – allows you to engage with the elements that much more viscerally. It also means you can hear the flat six more clearly on the move, which is a pleasure never to be underestimated. 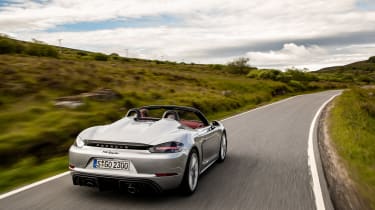 The 718 Spyder is powered by the exact same 4.0-litre atmospheric flat six that propels the GT4. It produces 414bhp and can rev to 8000rpm. Maximum torque of 310lb ft is developed between 5000-6800rpm, and if you’re wondering about its heritage the engine is actually a development of the new 992’s 3.0-lite flat six turbo. In this case it’s been bored out to 4.0-litres (the stroke remains unchanged from the 992’s motor) and its turbos have been removed. Like the GT4, it also features cylinder de-activation at light or zero throttle loads where it goes on to three cylinders to improve fuel consumption.

The gearbox is a six-speed manual with the same unusually long ratios in first and second as the GT4; it will do 85mph in second gear. The ‘box features a switchable auto blip function on downshifts that works a treat in practice, while the gear lever itself is also shorter than before for more precise movements. 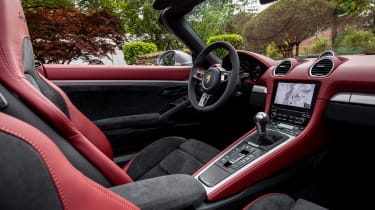 Give or take a kilo here or there, the new Spyder weighs exactly the same at a GT4, which means it weighs a touch more than it used to. Porsche admits that the kerb-weight has unfortunately risen to 1420kg due mainly to the fitment of new particulate filters in the huge new rear silencer. These will however keep it emissions friendly for many years to come.

On paper the Spyder has near identical performance to the GT4. It can hit 62mph in 4.4sec and takes 9.0sec dead to hit 100mph. Top speed is 186mph, and it’ll do that with the hood up or down, says Porsche. 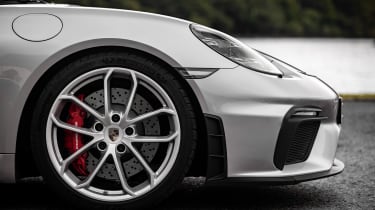 The Spyder’s chassis is exactly the same at the GT4’s, which means it is a lot more focused in setup than the previous Spyder. Essentially it’s a mid-engined version of the latest GT3 beneath the skin, and although there’s slightly less scope to adjust the suspension settings compared with the GT4 (whose dampers you can adjust manually if you know your way round a set of spanners) the two cars really are one and the same on this occasion.

Except for their aerodynamics. Without the GT4’s big rear wing or its dramatic front splitter, the Spyder doesn’t generate downforce, despite it featuring the same underbody diffuser as the GT4. Instead it merely suffers from no lift, says Porsche, which is good to know given the 186mph top speed. 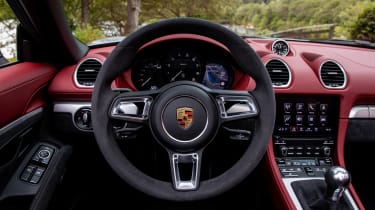 The brakes feature the same huge cross ventilated steel rotors at each corner as the GT4, again sourced pretty much lock-stock from the GT3. And if you’re going to do lots of track days in your Spyder there’s also the option of carbon ceramic discs, albeit for an extra £5597.

Unlike the GT4 the Spyder gets Porsche’s PASM system as standard, plus the normally optional Sports Chrono Pack as well. Both cars come on the same bespoke-for-Porsche Michelin Pilot Sport Cup 2 tyres, another sign of how much more serious a driving machine the Spyder is this time round.

Pretty special, to be honest. On a sunny day with the hood down, and under full beans in a low-ish gear, there is nothing else quite like the Spyder. And its combination of attributes is unique. The highlights include immense and instant throttle response at anything above 3000rpm, a spine-chilling exhaust scream, eye-watering body control, pin sharp steering and some of the best brakes you’ll come across in any road car, at any price. Yet it’s detail of the Spyder’s responses that arguably leave the biggest impression of all.

This is not a sledge-hammer kind of car, despite the fact that it is a seriously quick one. Instead it’s a car that’s multi-layered in its appeal. Even at 40mph there is feel through the steering wheel, through the seats and via the brakes that is simply missing from most, if not all other cars. There is a delicacy of touch to all its controls that can be appreciated, revelled in even, at any speed. 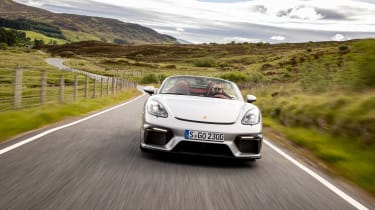 But when the moment comes and the right road eventually appears in the windscreen, and you deploy the throttle accordingly, the Spyder delivers a level of involvement and excitement – and a turn of pure speed – that really does take your breath away.

It’s torquey, too, so although the gearing is long in the first three ratios the engine can handle it. So at 3000rpm it feels strong; at 5000rpm it feels – and sounds – properly fast and furious; and between there and the 8000rpm red line it goes to another level again. One that no rival at this sort of money can deal with. Not that the Spyder has any bona fide open top rivals this side of £100k (and not many well beyond that, truth be told).

Rivals? What rivals? At £73,405 the Spyder seems incredibly well priced given how much of a thoroughbred it is beneath the skin, or how quick it is in the real world. It’s hard to think of many open top cars that are as good-looking as this, either.

A Jaguar F-Type SVR convertible has more power and more straight line performance, theoretically, but is frankly nowhere beside the Spyder overall. The Audi R8 Spyder also has more go on paper but costs almost twice as much and is not as good a sports car as the Porsche. Like the GT4 on which it’s based, the Spyder sits aloft of the rest of them in a class of one. Nothing this side of six figures gets anywhere close. 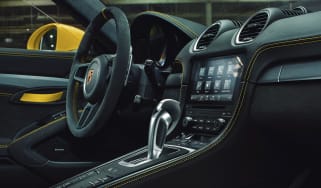