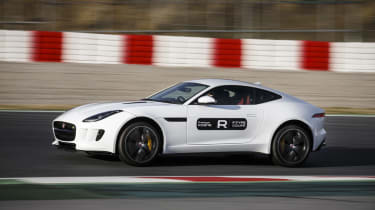 The Coupe version of the Jaguar F-Type, driven here exclusively on track in prototype form. The car will be going on sale in March 2014 and manages the neat trick of being both cheaper and – our subjective call – better-looking than the existing F-Type Roadster. The basic V6 Coupe costs £51,235 and the V6S costs £60,235 – both over £7000 less than their Roadster equivalents. At the top of the range the V8 powered Coupe R is £85,000, £5000 more than the V8 S Roadster, but with a more powerful 542bhp version of Jaguar’s 5-litre supercharged V8 engine.

Although Jaguar first showed the F-Type as the C-X16 motorshow concept, which was a coupe, the production car was engineered to be a roadster first and a tin-top second. That’s evident in the fact the Coupe doesn’t have any ‘B’ pillars behind its doors, with a single piece aluminium stamping for the entire side of the car. The car’s roadster origins are revealed in some small reinforcement pillars that connect the back of the roof rails to the rear bulkhead – pretty much where the Roadster’s roll-over hoops go – but these are almost invisible. Better news is a decently sized 315-litre boot under the rear tailgate, bigger and more usable than the tiny luggage compartment of the Roadster.

Jaguar claims that the Coupe’s body structure is the stiffest it’s ever created, with a torsional rigidity of 33,000 Nm per degree (a number that makes it 80 percent better at resisting twist than the Roadster.) All versions of the Coupe get unique chassis settings and revised software for their electric power steering systems, but the R also gets slightly firmer springs (4.3-percent stiffer at the front and 3.7-percent stiffer at the rear.) The R also has a more aggressive electrically controlled limited slip differential, which is claimed to be able to go from fully open to fully locked in just 0.2-second. It can also be ordered with carbon-ceramic brakes, a £7000 option.

The R’s powerplant is nearly identical to that of the V8 S Roadster, with the same 5-litre V8 Supercharged engine, albeit now producing 542bhp. Drive is supplied to the rear wheels through an eight-speed automatic gearbox, and Jaguar claims a 4-sec 0-62mph time.

You’ll understand if we reserve our full verdict until we’ve driven the Coupe R on road – Jaguar only let us have a chaperoned go on the Circuit de Catalunya near Barcelona. Which was fun, but didn’t really give us much of a feel of how it’s going to cope with a blast down the B660.

The R does feel slightly brawnier than the already rapid Roadster V8 S, with the difference made obvious on track by the way the back end squirms as it attempt to deal with the sheer quantity of torque being channeled through it. Even with the stability control system switched on the R can be felt trying to steer itself from the rear at surprisingly high speeds.

The body’s extra rigidity wasn’t immediately obvious on track, but it helps the Coupe’s steering – which shares the Roadster’s quick rack but which gives a better impression of what the front wheels are doing. Although smooth inputs are the best way to make it go quickly, the R seems to enjoy playing the hooligan more than any of the F-Type Roadsters – it’s a car you can sling around while staying confident in its predictable reactions.

As in the Roadster, the eight-speed gearbox is an opinion-divider, especially given its occasionally tardy responses when you take control yourself. Our test car, officially a prototype, also seemed determined to kick down even when left in ‘manual’ mode. In truth, the engine’s torque output is so high that gear choice is relatively unimportant, and it actually seems happiest on track with the gearbox left in ‘Drive’ in its sport mode. The new carbon brakes worked well on track, too – resisting fade better than the standard steel discs.

That’s a good question. The V6 versions of the Coupe look like relative bargains compared to their Roadster sisters, being both cheaper and more practical. We’d be surprised if the majority of buyers didn’t opt for the Coupe from this point onwards.

The range-topping R is a different story. On first acquaintance it shows great promise, and although it’s set to be the most expensive F-Type it undercuts rivals like the Aston Martin V8 Vantage and Porsche 911 Turbo by a sizeable amount. But to find out just how good it really is, we’re going to need to drive it on road. Watch this space.