It might lack the punch of the V8 versions, but the 400 Sport is one of the best drivers' F-types yet

The four-cylinder F-type might be making all the headlines right now but there’s still plenty of life left in Jaguar’s 3-litre supercharged V6, and the new F-type 400 Sport is now the fastest V6 F-type you can buy. With styling tweaks inside and out to complement the new power output, could it be the best F-type yet?

The 400 Sport is based on the existing supercharged 3-litre V6 S, gaining a 20bhp boost for a total of 395bhp at 6500rpm. Torque is now rated at 339lb ft, developed between 3500-5500rpm, while a mechanical limited-slip differential is standard, with options for rear- or all-wheel drive.

An eight-speed automatic transmission is also standard, operated by a pair of milled and anodised aluminium paddles mounted behind the steering wheel. Jaguar’s Configurable Dynamics system allows the driver to adjust the behaviour of the throttle response and gearbox between comfort, dynamic and wet modes, the first two doing much as you’d expect and the latter softening the car’s responses should the going get slippery. 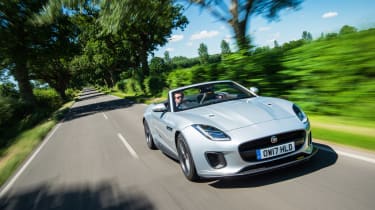 For the all-wheel drive cars, Jaguar quotes an official 0-60mph time of 4.9 seconds whether coupe or convertible (5.1sec to 62mph), and the same 171mph top speed for both versions too. Brakes are upgraded over standard, with 380mm front discs and 376mm rotors at the rear.

Engine and brake upgrades aside, it’s standard F-type V6 S fare here. The biggest changes can be found to the car’s styling, where a dark satin grey finish is used to pick out the new details of the Sport Design Pack: the five-spoke, 20-inch alloy wheels, front splitter, side sills, rear diffuser, and air vents, with a smattering of bright yellow 400 badging. Other changes are common to all new F-types, including the dark rear light lenses, and the full LED headlights found at the front.

Inside, the 400 Sport is distinguished by yellow contrast stitching to any surface usually swathed in leather, as well as 400 Sport badging on the steering wheel, centre console and sill plates. 400 logos are also embroidered into the headrests of the Performance seats.

V6-engined F-types deliver a less dramatic, theatrical experience than their V8-engined brethren, and the 400 Sport continues that trend. It feels a little brighter in its responses to throttle and steering, a little less overpowering in its delivery - think of it as a crisp gin and tonic rather than a pint of stout.

There is no immediately apparent reason this should be the case - the 400 Sport is still a heavy old brute, at 1694kg for the AWD convertible model driven here, and with 255/35 R20 tyres up front and 295/30 R20 at the rear, and it still has a stocky footprint.

But with each round of tweaks, Jaguar improves the F-type’s behaviour, and the steering in this example is probably the best we’ve tried; it’s less hyperactive to initial inputs, more linear, and offers greater feedback than before. It means the 400 Sport avoids that slightly unnerving feeling of previous F-types that it’s unloading the rear axle as soon as you roll your wrists, and the rack weights up more naturally as loads build through the front tyres. 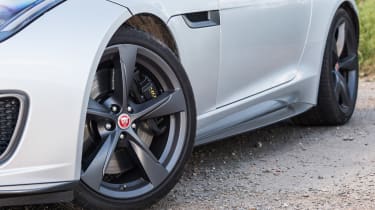 Combine this with the tweaked V6 motor, and you have a car that’s now more predictable and at the same time more involving to drive quickly. The throttle response of the V6 models has always been less edgy than that of the F-type R, but there’s now more bite too, particularly in dynamic mode. The 400 doesn’t instantly feel as quick as its name suggests it should, but stick with it and the rewards are there, from a strident (if slightly artificial) exhaust note to an increasing build-up of power towards the 7000rpm red line.

It all ties together on twisting roads, with your own inputs to the steering and throttle resulting in the outputs you expect from the chassis and engine. Combined with plenty of grip and traction and a feeling that both ends of the car are sharing the work of cornering, it’s easy to build a flow - and a surprisingly pliant ride and quick, responsive shifts from the ZF eight-speed transmission do nothing to break that feeling.

The 400 Sport’s slimline Performance seats are great too; while they initially feel firm and unyielding, there’s enough adjustment to find the ideal driving position and they support your body in all the right places. Cooling fans also took the sting from their black leather surfaces on the sizzling day of our test, too... 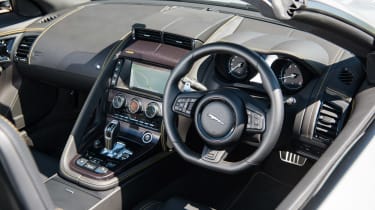 As ever with the F-type, those figures pitch it somewhere between Porsche’s Cayman and 911. The F-type isn’t as sharp as either of those though, and other rivals are difficult to come by.

Perhaps closest in spirit are cars like the Mercedes-AMG C63 and BMW M4, both of which are more powerful than the 400 Sport and a little easier on the wallet, but also pack plenty of visual and audible attitude into a relatively compact footprint. A C63 coupe begins at £63,475, while M4s begin at £58,365.