Lister Thunder review – is 666bhp too much? 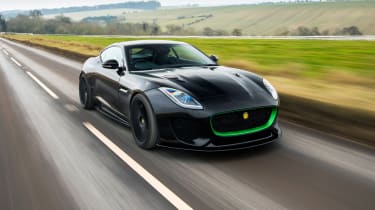 You’re more likely to hear it before you see it, unless you’re using binoculars or have the eyesight of Steve Austin, and when you do see the Lister Thunder it doesn’t disappoint. Sitting low on wheels that look even bigger than their 21in diameter, the Lister is what could have been on the sketch pads of Jaguar’s designers when they penned the F-type.

There’s not a single Jaguar badge to be seen though and although Lister has been associated with Jaguar since the ’50s, the name will be new to some because the British firm’s last road car, the Storm, was made is tiny numbers in the ’80s. Since taking over, Lister’s new owners, Andrew and Laurence Whittaker of Warrantywise, have already launched a ‘continuation’ run of its most famous racer, the Knobbly, and is now taking deposits for the Thunder, of which 99 will be built, priced from £139,950.

The Thunder is based on the all-wheel drive F-type R. The wick is turned up on the 5-litre, supercharged V8 with greater boost from its supercharger, new intercoolers and air filters, a whole new Novitec exhaust and a remap. This lifts power from 542bhp to 666bhp, backed up by 720lb ft of torque. ‘It came out at 670bhp on the dyno,’ says Laurence Whittaker, ‘but 666 is more evocative’. This 100bhp-plus increase is said to drop the 0-60mph time to 3.2sec and raise the top speed to 208mph. 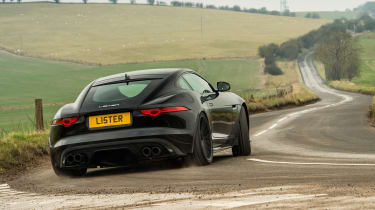 The uprated V8 is hooked up to the standard eight-speed ZF auto box. Also retained are the adaptive dampers, though the springs and spring platforms are adjustable KW units, offering an adjustable set-up. Those huge Vesson alloy wheels are shod with the lowest profile Michelin SuperSport tyres - just 25 section 295s on the rear. Proper rubber bands.

The other major component of the make-over is the interior re-trim. The seats, facia, door casings and just about every surface in the cockpit is re-covered in the finest Bridge of Weir leather with contrast green stitching.

It’s all about the noise at first. Jaguar’s V8 F-types are known for being quite vocal but the Lister takes this to another level. There are no tailpipe valves so there’s no ‘quiet’ mode, and  it’s incredibly loud at idle, under power and even on the overrun, so much so that it takes a few miles to get your head around the rest of the car. This is the prototype and the chassis set-up is not finalized. In the wet with the car set to the slippery road mode, which sets the dampers to soft, the rear tyres lightly scuffed the wheelarches over big bumps. The torque can kick the tail out exiting junctions but, as in the standard F-type, straight-line traction is phenomenal. Generally, the felt a little distracted on lumpy B-roads and then we hit a decent bump and lost a rear suspension brace. Lister has taken another look at the set-up since.

In the dry, with Dynamic mode selected and the damping set firm, we had no issues with arch clearance and the Thunder felt much better - grippy, planted and poised. Is it fast? Perhaps not as fast as it sounds but low-down and mid-range urge is strong and, tellingly, this is one of those cars that is always travelling 20mph faster than you expect.

Just 99 Lister Thunders will be built and a few weeks after announcing the car, Lister had taken deposits for over 30 of them. Its appeal is partly that it’s a limited edition from an iconic British brand, that it’s a striking looking F-type with a booming voice and that it has a traditional hand-crafted cockpit. If you have the £140k asking price you could be looking at a quick Porsche 911 but more likely it’s a new Aston Martin Vantage or Bentley Continental GT that’s tempting you.