The SVR is the best F-type to date, but improvements over the standard car are marginal at best 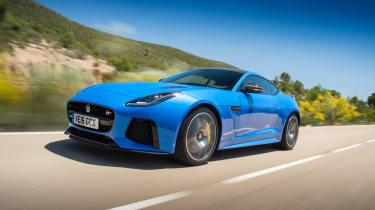 The Jaguar F-type SVR is a lighter, faster and sharper version of Jaguar’s F-type R All-Wheel Drive. Don’t be fooled into thinking the F-type SVR is a trackday hero in the image of a 911 GT3, though. ‘SVR is about everyday usability,’ says Mark Stanton, director of Jaguar Land Rover’s Special Vehicle Operations division. ‘It’s about taking the basic traits of a Jaguar and amplifying them appropriately. We wanted to dial up the performance without losing the duality.’

The SVR tag made its debut on last year’s Range Rover Sport SVR and this is the first time it’s been applied to a Jaguar. It becomes the fastest F-type to date with a 200mph top speed.

The 5-litre supercharged V8 that serves so effectively in the existing F-type line-up is carried over, albeit with an additional 25bhp and 15lb ft of torque to lift outputs to 567bhp and 516lb ft. The familiar eight-speed automatic transmission is carried over, its software having been tweaked by Special Vehicle Operations. 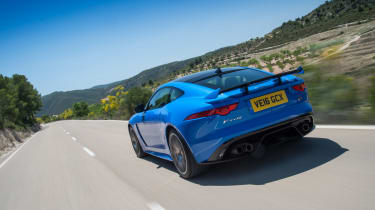 The four-wheel drive system is carried over, too, and it now sends fractionally more torque towards the rear axle. The 0-60mph time is quoted as 3.5 seconds, but given that we recorded that exact time in a standard F-type R AWD we should expect the SVR to better Jaguar’s claims.

The chassis has been revised with new dampers and anti-roll bars, but spring rates are unchanged. The tyres are wider, the 20-inch wheels are lighter and the rear knuckles are stiffer. Those new rear knuckles are less susceptible to flexing in hard driving, which means the rear contact patch is more stable, improving mechanical grip.

Overall roll stiffness is unchanged, but it has been shifted rearwards to give a more neutral chassis balance, which improves the car’s turn-in characteristics. Special Vehicle Operations also retuned the electric steering, the torque vectoring and the stability control systems to give the SVR sharper on-the-limit dynamics.

The roof panel is now available in lightweight carbon fibre and the new aero package – including an active rear wing, rear venturi, front splitter and a flat underfloor – manages the airflow around the car to reduce lift.

A titanium and inconel exhaust system gives a ‘harder-edged’ sound, according to Jaguar, as well as cutting 16kg. The overall weight saving compared to the F-type AWD is 25kg, but the same again can be saved by specifying the carbon roof, carbon ceramic brakes and the carbon styling pack. 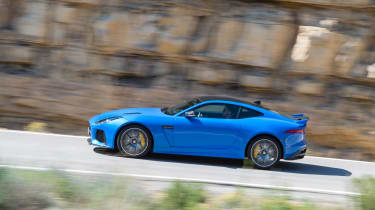 F-types have always felt rather stiff at low speed and the SVR, its spring rates unchanged, is no exception. With speed, though, ride quality improves drastically – in fact, the SVR actually rides slightly better than the base model over 40mph or so. You do need to be very familiar with both versions to notice the difference, however.

Various other traits are carried over, such as the hyperactive steering that takes some time to adapt to. At first it can make the car feel edgy and nervous, but after a few miles you learn to trust the exaggerated rate of response. Once accustomed it makes the car feel tremendously agile on the way into a corner, although the steering is never particularly feelsome.

Body control is good and grip levels are very high, too, which helps to disguise the car’s rather hefty 1705kg (claimed). The damping into compressions is a real highlight, the suspension soaking up the impact without fuss and in a single stroke, which again belies the car’s weight. All of those things are also true of the F-type R AWD, though – the SVR doesn’t do anything the base car can’t do; it simply does everything fractionally better.

The four-wheel drive system claws massive traction out of the road surface, but with so much power beneath your right foot you can, naturally, play with the car’s balance away from a corner. In sweeping bends it’ll only adopt the faintest oversteer stance, but in tighter corners it can be encouraged to drift – although the four-wheel drive systems arrests the slide long before it gets out of hand. 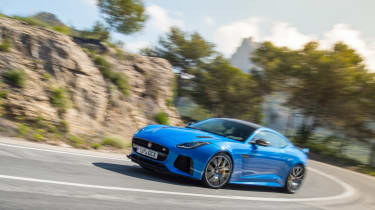 That gives you enormous faith in the car, so you can hustle it at huge speeds without ever feeling as though it might bite. Its raw pace down a road is staggering and it is massively entertaining, too, but a rear-wheel drive layout would represent more of a challenge.

The engine doesn’t feel any more urgent in practice than that of the standard car, but it does still pull hard throughout the rev range and throttle response is still fantastically sharp. The automatic gearbox is good but not great and the soundtrack is still dramatic and exciting, if a touch tuneless.

We’re talking detail improvements in just about every area, which together make for a reasonable uplift in performance and dynamic ability. The SVR is certainly not a night-and-day improvement, though, and it still feels as though there’s untapped sporting potential lurking within the F-type.

The Mercedes-AMG GT S is priced in line with the F-type SVR at £110,510, and although its ultra-modern turbocharged V8 makes the Jaguar’s power unit feel like a Victorian relic the AMG certainly doesn’t outclass the F-type down a twisting stretch of road.