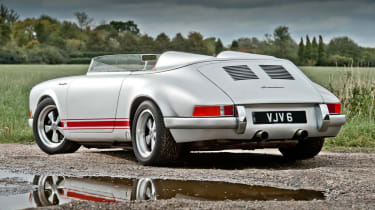 What is it? Meet the PS 911 Spyder. It’s hard to believe that amongst the myriad different models in the 911 range, Porsche has never built a Spyder version. It came close on three occasions with the 930, 964 and 997-generation Speedsters but, for whatever reason, Zuffenhausen has always stopped short of producing a completely roofless 911. Step forward Paul Stephens, Essex-based creator of the PS AutoArt series of retro-modern 911s and now this, the PS 911 Spyder. The idea for this one-off alloy-bodied 911 Spyder had been appearing in Stephens’ dreams for years, but it wasn’t until he acquired a rather sorry 1989 911 Targa last summer that he decided to embark on the project. More than 2000 hours of craftsmanship later, that Targa has been transformed into the car you can see here. Technical highlights? His choice of base car is shrewd, for being a late 3.2-litre model means it has the G50 gearbox, which has a more precise and modern feel than the often recalcitrant 915 ’box. The trusty motor benefits from a mild makeover, with a lightweight flywheel to improve its throttle response and an ECU remap to improve fuelling. Power has risen usefully from 231 to 250bhp, which is plenty in a car weighing just 950kg. The front and rear wings are standard steel items, but the doors, bonnet, engine cover and double-hump deck behind the seats were all made by hand from aluminium. The windscreen and side windows have been replaced by what’s best described as a low Perspex wraparound visor, while beneath the rear deck is a sturdy tubular crossbrace and rollover hoops to increase rigidity and provide at least some rollover protection. What’s it like to drive? Dynamically it’s an addictive blend of old-school 911 handling and a very healthy power-to-weight ratio. The G50 gearbox allows you to work quickly up and down the ratios and the standard brakes are easily enough for the modest sub-ton mass. Push the Spyder through a series of transitional turns and you can feel the rearward weight bias at work far more than you do in a modern 911, but because the levels of grip and power are so well balanced you can make the Spyder dance to your tune at less than breakneck speeds. In short, it’s terrific fun. The interior is particularly special. The unbroken curve of the roll-topped dashboard is a classic Spyder design element. The retro-faced dials and large-diameter Momo Prototipo steering wheel are visual and tactile delights. You feel at once safe and snug but also exposed to the elements and the wonderful parched rasp of that 3.2-litre flat-six exhaling through a pair of 3in exhaust pipes. There is buffeting above 60mph and I’d definitely recommend sunglasses or goggles as stray stones and bugs can come whipping in over the low screen, but on a fast and flowing B-road the Spyder is a thoroughly engaging car to drive. How does it compare? Costing £150,000, the PS 911 Spyder is a very specialist proposition. The nearest modern-day alternative is one of Porsche’s own 911 Speedsters, the recent 997-vintage Speedster fetching around £130,000 nowadays for a low-mileage example. If you like the Spyder’s ethos but only have a fraction of the asking price at your disposal, there are countless companies offering Porsche 356 Speedster and 550 Spyder replicas from as little as £20,000. Anything else I need to know? A quick walk around the Spyder reveals it looks great from some angles and awkward from others. Stephens is considering another design of rear deck as he’s not entirely happy with the first attempt, but the overall result is striking and appealing. With a twinkle in his eye, Stephens also says that with a lighter Carrera as a base car (perhaps with an earlier 915 gearbox) and a bare-bones track-biased build, he could create a Spyder that was comfortably sub-900kg, perhaps even 850kg. With engine tuning options to 300bhp and beyond, that would be literally and metaphorically breathtaking.