Is Porsche Exclusive’s £144,100 911 Speedster a collector’s trinket or a serious driver’s car? We find out. 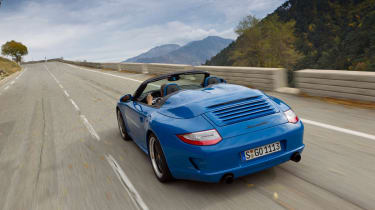 The fourth generation Porsche Speedster (following the 356, 930 and 964) and the second standalone model from Porsche Exclusive. To honour the original 356 Speedster, and presumably to justify the monster £144,100 asking price, production of the 997 Speedster is strictly limited to 356 units worldwide.

A new colour – “Pure Blue” – has been created for the Speedster, and will never be available on another Porsche model. If you don’t like blue Porsche Exclusive will also paint the Speedster in Carrara White on request. Ironically this will make it the rarer car.

The Speedster’s most striking feature is, of course, its 77mm shallower windscreen. Unlike earlier Speedster models the rake of the windscreen remains the same as other 997s, but the bespoke roof and ‘double-bubble’ tonneau cover are both unique to the Speedster.

Unlike the Boxster Spyder, which has more rudimentary weather protection, the Speedster’s roof is a proper job. It’s manually operated, so you’ll be clambering in and out of the car a few times to stow or erect it, but the procedure isn’t too fiddly or time-consuming. Having experienced torrential rain during our test, I can also confirm it is completely watertight.

Like the Sport Classic (and the forthcoming GTS) the Speedster features the 408bhp ‘Power Kit’ version of the 3.8-litre flat-six. It’s mated to a seven-speed PDK transmission (manual is not an option) and controlled by the Sports steering wheel’s paddle-shifters. Standard equipment also includes PCCB brakes and PASM suspension. 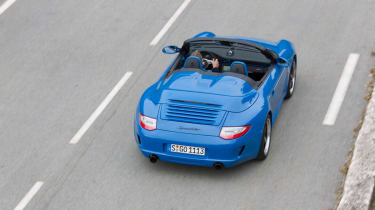 Unfortunately Nice was hit by atrocious weather on the day of our test. When the car you’re driving is defined by the roof-down experience that’s massively frustrating. We’ll get the chance to drive the car again in a few weeks, but for now what we can say is the Speedster feels every bit as rigid, composed and planted on challenging roads as you’d hope and expect from a topless 911.

The combination of standard PASM suspension and PDK delivers suppleness and easy-going progress when you need it, yet Sport and Sport Plus modes give you increased responsiveness and dynamism when you’re driving quickly. PDK still lacks a sense of connection and engagement, more so in naturally-aspirated 911s than the Turbos, but at least the Sports steering wheel and its conventional paddle shifters make it a more intuitive ‘box to take control of.

It’s a shame that in shedding the power roof’s motors the Speedster didn’t lose any weight compared to a Carrera 2S Cabrio, but the power-kitted engine pulls smooth and strong from low revs to the redline and sounds fabulous through its sports exhaust, even with the roof up. Being rear-wheel drive means you’re much more likely to have some fun than in the similarly wide-bodied Carrera 4S Cabriolet. Throw some sunshine into the mix and there’s no doubt the Speedster will be a special experience. 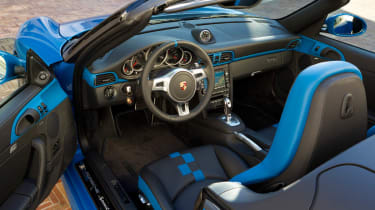 The Speedster is undoubtedly a collector’s dream. With just 356 cars to satisfy a global market (including the USA), demand is sure to outstrip supply. Unsurprisingly many are already spoken for, including the full UK allocation, which rather proves Porsche Exclusive knows its customers inside out.

That’s perfect justification for Porsche to build it, but if Porsche Exclusive’s level of, er, exclusivity, isn’t your overriding consideration then objectively the Speedster is a total extravagance.

A 997 Turbo S Cabrio is MUCH faster and still usefully cheaper, while the forthcoming GTS Cabrio features the same wide-body, rear-drive and 408bhp motor combination, but with the added appeal of a manual transmission option. Perhaps the most compelling argument against the Speedster is the thought of a 997 GT3 and a Boxster Spyder in your garage for the same money. 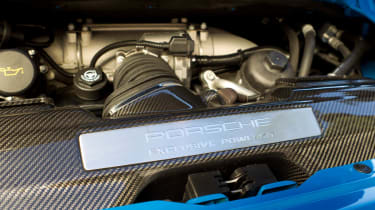 The Speedster order book opened on September 21st and although not yet officially sold-out worldwide, you’d do well to speak to your Porsche dealer without delay if you have a Speedster-shaped hole in your life. Unlike the Sport Classic the Speedster is available in both left and right-hand drive. Deliveries start in January 2011.