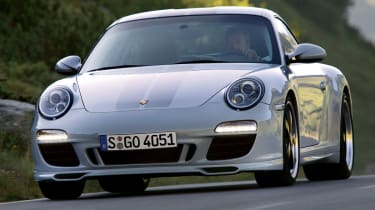 If you like your 911s, you’ll do well do visit this month’s Frankfurt motor show. Porsche is already revealing the new 997 Turbo, GT3 RS and GT3 Cup on its home turf, and now this 911 Sport Classic is joining the party.

It’s a limited edition and is unusually retro for Porsche, harking back to 911s of old in a gesture to the car’s rather dedicated fanbase.

Nods to previous supercars come in the form of the 2.7 RS-inspired ducktail spoiler, Carrera GT-style double bubble roof and those standout 19in alloys that hark back to 911s of the 1960s and 70s. Also note the bodywork’s double stripes and the new lights front and rear, which help set the Sport Classic apart from its 997 stablemates further.

Under the skin it’s a rear-wheel-drive Carrera S, although its direct injection 3.8-litre flat six gets a 23bhp hike to 403bhp, achieved with tweaks to the intake manifold and engine airflow. There’s also a specially developed exhaust system, which culminates in split twin tailpipes at the back of the car. Top speed is 187mph while 0-62mph takes 4.6sec.

The engine is mated exclusively to a short-shift six-speed manual gearbox – no PDK to be seen – while ceramic composite brakes and a limited-slip diff are standard. PASM sports suspension is also fitted, with a 20mm lower ride height. The rear axle’s track width is larger, and is contained in 44mm wider rear bodywork.

If you want a Sport Classic, you’d better like brown and grey; the interior and exterior combination is your only colour choice. The inside is a world of luxury, with woven leather and an abundance of standard equipment (including a 13-speaker BOSE stereo). To compensate for the additional weight of it all, there’s some neat touches such as aluminium doors.

Just 250 911 Sport Classics will be made, with a UK price of £140,049. That’s over twice the cost of a standard Carrera S. Sales begin in January 2010, but if you can’t save up in time then Porsche is kindly introducing a range of Sport Classic paraphernalia at the same time – you can take your pick from a polo-shirt, cap and a model of the special edition 911.

The whole lot will be shown at Frankfurt from September 15, and evo.co.uk will be reporting live from the event. View all the latest news here. And don’t forget to follow evo Magazine on Twitter for the performance car latest.