Porsche has a new, more powerful Boxster S. Henry Catchpole takes one to an Austrian hillclimb and retraces the wheeltracks of one of its illustrious ancestors 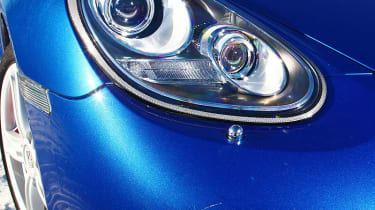 Light is flooding into the room when I wake up. It’s the sort of light that you only get in the mountains in winter; light that’s brighter and sharper because it’s bouncing and reflecting off snow. It was dark when we arrived on the Gaisberg road last night so I’m not entirely sure what I’m expecting to see as I stumble bleary-eyed towards the window. I blink hard twice and try to be certain that I am actually awake. If heaven has a view then I think it will probably look like this. The Alps are rising up out of a thick carpet of cloud into a clear blue morning sky.

It all seems a bit surreal to be here because 36 hours ago the evening flight to Stuttgart that photographer Kenny P and I were meant to be catching was cancelled. This left us in a bit of a pickle. Most of Germany, it seemed, was under snow. If we waited till morning, there was a strong chance Germany would still be under snow and more flights would be cancelled. So we decided to drive. Overnight. We arrived at Werk 1, Porscheplatz, Stuttgart-Zuffenhausen late the following morning, looking slightly crazed and sugar-fuelled but luckily not so dishevelled that we weren’t allowed to take away a new Aqua Blue Boxster S.

The most obvious difference when you walk around the new Boxster is the front end, which now looks very much like the Carrera GT, thanks mostly to the new headlights with their ‘twin tubes’. Otherwise the changes to the push-me-pull-you styling are minimal, but under the skin there are several important advances. The 3.4-litre flat-six is actually a completely new engine, which, like the new 911’s, now features direct fuel injection. It is not only 6kg lighter but also has fewer components. More importantly, it produces 15bhp more than the old engine, taking maximum power to 306bhp at 6400rpm (which, if you like those kind of details, is 6bhp up on the first-generation 996 Carrera).

Receiving a more cautious welcome is the introduction of PDK to the Boxster. Porsche’s twin-clutch transmission allows the S to reach 62mph in 5.2sec, 0.1sec quicker than with the standard six-speed manual. Thanks to its ultra-leggy seventh gear (top speed of 169mph is reached in sixth) it can also claim to achieve 30mpg on the combined cycle, which, like the iPod connection and excellent new touch-screen in the centre console, is a boon when you’ve got a three-and-a-half-hour drive to Salzburg, Austria, ahead of you…

It was dark by the time the satnav said, ‘You have reached your destination.’ As with so many of our meticulously planned trips we weren’t entirely sure what to expect when we arrived, and an exploratory potter up to the top of the road didn’t reveal much other than snow, trees and the fact that the road had been salted, which was something of a relief. Once we reached the top, however, there was a spectacular light show – Salzburg sprawled out like a river of stars in the valley below. Of mountains, though, we could see nothing.

The nearest hotel we could find was a sort of large but deserted chalet about two miles back down the road. The chef, who had probably been looking forward to an early night, didn’t seem very happy about providing board and lodging, but two rooms, two steins, two plates of meat and veg (literally) and two bowls of apple strudel (awesome) were grudgingly produced and, frankly, we were too tired to care about degrees from charm school anyway.

The reason we’d driven all this way is that Gaisberg and Porsche have history. The Gaisberg road was a venue for one of the rounds of the European Hill Climb Championship when it first started back in 1957, and in 1958 Wolfgang ‘Taffy’ von Trips won not only here at Gaisberg but also claimed the championship for Porsche for the first time. The car he was driving just happened to be a 718 RSK – and you’re not going to find a more likely ancestor of the Boxster.

Gaisberg isn’t as well known as Monts Ventoux and Parnes but the view out of the hotel this morning is telling me that it should be. It’s like God has purposely created a hill to act as a viewing platform for the Alps. The first shock of the morning (after plunging our hands into freezing water to wash the car for the first and last time) is how much further we have to drop to reach the beginning of the road. The hill climb starts outside a dilapidated building just off the B158 near Guggenthal, a phenomenal 9km from the top. Looking up into the sun it’s just possible to see the red and white striped radio mast on the top, 1265m above sea level. If the words ‘hill climb’ make you think of Gurston Down or Shelsley Walsh, think again.

The new Boxster S starts with a much deeper, gruffer sound than the old car but retains that hollowness so distinctive of Porsche’s flat-sixes. Despite the temperature struggling to show positive numbers, the electric roof has to come down as far as I’m concerned, because it makes you feel so much more part of the scenery you’re driving through. I also figure that I can fairly easily avoid any taunts about hairdressers’ cars given that my bonce obviously hasn’t seen a comb in the last two decades.

Pull the gearlever back to ‘D’ and gently roll off the line. Of course, if this were a competitive run I would have selected ‘Sport Plus’ on the centre console and used the launch control. As it is, I settle for Sport – the best shift option if you’re leaving the ’box in auto mode (the normal setting slurs gears utterly imperceptibly and maximises fuel efficiency, which is impressive but a bit boring). If you want to select gears manually and are happy to risk using the confusing buttons on the steering wheel (push to go up a gear, pull to change down) then opt for Sport Plus, because the shifts thump through faster and a bit more satisfyingly. But, yes, a manual would still be more enjoyable.

Because it’s such a gorgeous day, the mountain is understandably quite popular with Austrians in walking boots, so Kenny and I decide to work our way relatively slowly up the climb, photographing as we go and trying to imagine what it must have been like trying to coax a car up here 50 years ago. The gradient varies significantly in the nine kilometres, from almost flat at the halfway point to launch-ramp steep near the bottom and again at the top. The Boxster S does its best work above 4000rpm, when you receive an added push in the back (it’s not violent enough to be a kick) and you get the feeling that the car is lengthening its stride. Of course, it shrugs off the climb in a way that I suspect Taffy would have found amazing.

The scenery changes hugely as we climb, too. At one point you’re flashing past rock faces hung with icicles, then you head onto a tree-lined straight, emerging through open meadows before heading on up to the exposed summit, where paragliders are chucking themselves off the edge. I spend a little while trying to work out exactly what the fantastic sound is that the PDK makes on high-rev upshifts. Eventually I pin it down to the distant thud of a plane breaking the sound barrier out at sea.

As the sun starts sinking behind the jagged peaks, turning the snow orange and cooling the air so that breath becomes visible once again, a quietness descends on the mountain. The last few people are leaving, so we return to the start for a proper run up the course.

Headlights, Sport Plus, Manual, heated seats to max and we’re off into the first long right-hander. The Boxster is the ideal car to drive quickly up an unfamiliar road soaked in meltwater; the balance is perfect and this standard, non-PASM suspended car is beautifully taut and composed at speed. The only downside to the new Boxster is the steering. It’s still precise and fantastic compared with most cars, but the engineers have seen fit to lighten it. Perhaps the winter tyres aren’t helping, but some of that writhing textural feedback you used to get through the rim of a Porsche steering wheel has been replaced by silky smoothness. And that’s a shame.

Soon a road that, if I’m honest, I wasn’t sure was that special when I was driving it slowly earlier in the day is turning out to be incredible. At speed the corners flow into one another, the road’s width waxing and waning constantly to keep you concentrating. Halfway up and my ears pop. Refreshingly, and contrary to what you might expect, there are only two hairpins in the entire length of the road, but with the optional limited-slip differential fitted to this car (the first time it’s been offered on a Boxster) and PSM disengaged, it’s easy to enjoy the two switchbacks. The diff helps you to subtly work the rear through longer corners too, adding more traction as you feel the back load up on the outside wheel.

Up the final straight, hold your nerve and stay in third for the fast left before turning late into the final long right that appears to coil round ever tighter until the trees recede and there’s nothing left above you except the rapidly dimming firmament. I can’t think of a more spectacular finish line anywhere in the world.