Rare, handsome and fantastic to drive. Shame that so few people know the Cayman Sport exists 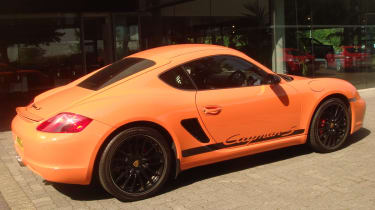 Odd car, the Cayman S Sport. Released just before the latest Cayman update arrived, it was never really featured in the motoring press. It should have been, though, as it’s a very desirable car in more ways than one. First off, limited-run Porsches tend to hold their value better than standard models. Secondly, the Sport gives the already fine dynamics of the old Cayman S a further polish.

This car was first registered in December 2008, when it cost its original owner a chunky £54,068. The Sport came with a number of expensive extras fitted as standard, including sports seats and 19in ‘SportDesign’ wheels; it sits 10mm lower than the standard S too. This particular car also has climate control, Porsche’s Communication Management System (including satnav), parking sensors and Bose surround-sound.

Inside, the suede steering wheel and gearlever give the interior just the subtle lift it needs to elevate it above regular Caymans. A silver plaque on the dash shows that this car is number 390 of 700 produced.

Behind the wheel, you soon notice that the gearchange is the ultra-short-shift version, which seems notchy at first but suits the car perfectly, while the enhanced engine feels super- smooth and especially punchy above 4500rpm. The standard sports exhaust is never intrusive and sounds terrific as the red line approaches.

Rare, handsome and fantastic to drive, this car looks like an excellent buy. Shame that so few people know the Sport exists. Given time, however, I expect it will gain quite a following amongst Porsche enthusiasts.

• ExteriorColour scheme suits the car perfectly. Tyres still have the original moulding dimples on them• InteriorVery black, but suede wheel and gearlever give a nice motorsport ambience• MechanicalsNot even run-in yet, and there’s nearly 18 months of manufacturer’s warranty left• Should I buy it?Super rare, looks good and drives even better. Great colour combination tooFOR: You won’t be disappointedAGAINST: Same amount of money could buy you a nice 911