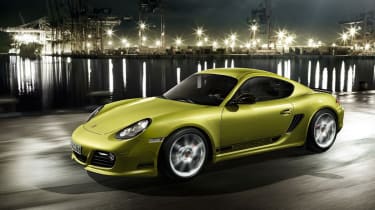 Five years, one mid-life upgrade and a frantically spinning rumour mill on from its launch, Porsche has finally announced a stripped out version of the Cayman. It’s called the R, has 325bhp, costs £51,731 and goes on sale here next February.

There’s no word on exactly what’s been done to the direct injection 3.4-litre flat six to extract the extra 9bhp over the standard Cayman S, but it’s enough, claims Porsche, to have lopped 0.2secs off the 0-60mph sprint, which now stands at 5secs flat (or 4.7secs if you opt for the PDK gearbox).

But that’s not all. Porsche has brought the same weight saving ethos it applied to the GT3 to the Cayman, the result being that the Cayman R has no air conditioning or stereo as standard, there’s a smaller 54-litre fuel tank, carbon seats, aluminium door skins a la GT3, sports suspension complete with a 20mm drop, a limited slip diff and lighter wheels that save 1.25kg per corner.

It all adds up to a 55kg saving in total, meaning the R has a power to weight ratio of 251bhp/tonne, while the S makes do with 234bhp/tonne.

The R has its premiere at the LA Show today and according to Porsche, ‘has been created for one reason: pure, distilled driving dynamics’. We can’t wait to find out for ourselves.