Porsche has unveiled the new GTS version of the Panamera at the 2011 Los Angeles motor show, with 424bhp and a 179mph top speed. 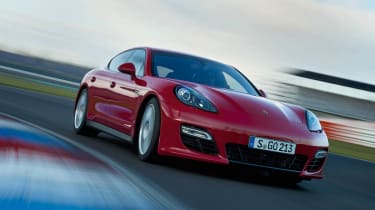 Porsche has extended the range of its ‘GTS’ branding with the announcement of a Panamera GTS at the Los Angles motor show.

Based on the naturally aspirated V8 version, the GTS is being pitched as the most dynamically focussed model in the range, sacrificing some of the whizz-bang performance of the turbocharged version for a purer driving experience.

Power has been increased to 424bhp, thanks in large part to a free-breathing sports exhaust system. This is accompanied by 383lb ft of torque. Porsche reckons those numbers will translate into a 4.5-second 0-62mph time – only 0.3 seconds off the time taken by the Panamera Turbo. Slightly disappointingly, the GTS is only going to be available with four-wheel drive – we’ve tended to prefer rear-driven Panameras – and Porsche’s seven-speed PDK dual-clutch gearbox.

Other stuff? Well we’re looking forward to experiencing the ‘Sound Symposer’, which is claimed to transmit engine sound into the cabin via the A-pillars. The GTS sits 10mm lower than the standard Panamera S. Active suspension and Porsche’s Sport Chrono pack are fitted as standard, as is Porsche’s Sport Plus programme. This mode lowers the car, switches it to a firmer damping rate and adjusts the angle of the rear spoiler, producing genuine downforce at higher speeds.

Other touches include larger air intakes in the front bumper and an optional gloss black detailing package for the exterior, including matt black tailpipes. An exclusive body colour of Carmine Red is also available, although this really underwhelmed on the LA show stand.

UK sales will being next February, with prices set to start at £90,409. That’s a premium of nearly £18,000 over the recently launched BMW M5 – the Panamera GTS will have to be very good indeed.