Renault's new Espace looks set to push the name more upmarket. The covers will be pulled off at the 2014 Paris motor show 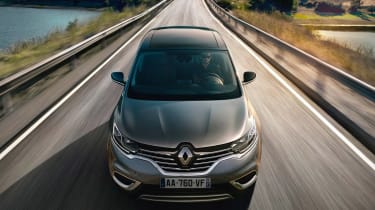 Renault is to reveal its new Espace at the 2014 Paris motor show. Sold only in right-hand drive markets, the new crossover features trendy design and a modern interior to push the Espace name further upmarket.

The decision to shift from traditional MPV to a crossover design was made in order to make the five-door more attractive to modern buyers. Combining ‘strong design with seductive appeal,’ much of the design has been influenced by the Initiale concept unveiled at Frankfurt in 2013. The result sees bulging arches, bulky wheels and a swept-back roofline accompany a raised ride-height and chunky details.

Though no pictures of the interior have been released, Renault promises that the cabin will stay true to the 30-year-old Espace name with a bright and airy layout. Particular attention has been paid to design and build, with a modern floating centre-console sitting ahead of a spacious cabin, available in both five- and seven-seat layouts.

The new image Espace is set to be unveiled in Paris at 11am on 2 October. Check back here for updates after the covers are pulled off.