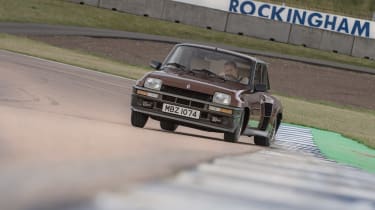 For that you need look no further than the white and yellow first-gen Turbo of Dimitris ‘Taki’ Manolopoulos. Originally built by the factory and campaigned as a works car in the World Rally Championship, this fabulous old warhorse made its competition debut and sole works outing at the 1981 Monte Carlo Rally, sporting the famous red and orange Calberson livery and with Bruno Saby at the wheel. Retiring from the event midway through, after an accident, the car was taken back to Renault Sport headquarters in Dieppe, where it was repaired and rebuilt to the same to Group 4 spec. Renault then honoured a sale agreement to Greek rally driver and renowned buyer of works Renault competition cars Alexandros ‘Leonidas’ Maniatopoulos, who privately entered the 1982 Acropolis Rally and scored an impressive eighth-place finish.

With the imminent transition from Group 4 to Group B, Leonidas sent the car back again to Dieppe to be updated, whereupon it was placed on the production line of the 20 ‘evolution’ cars required to comply with regulations. The car assumed its new factory Group B identity as ‘Tour de Corse Evolution’ before being delivered back to Greece in the factory yellow and white colours for the 1983 season. Taki then acquired the car in 1984 and has campaigned it with his son, Thomas, in the Greek Hill Climb and Greek National Rally Championships for the last three decades. Scoring some 200 wins, the pair – and car – have achieved cult status amongst Greek fans.

Taki has never let anyone but Thomas drive the car, so you can imagine my apprehension as he straps me in, instructs Thomas to give me a pre-flight briefing, then steps back to let me head out onto the track. This is the real deal. It smells of sweat and speed, of tortured soft-compound rubber and high-octane fuel. Original spare parts are rarer than dodo doo-doo, and such is the state of tune that once its warm you have to keep the engine working hard to avoid fouling the plugs. It’s a no-nonsense, no-prisoners nutter of a thing, and I love it already. 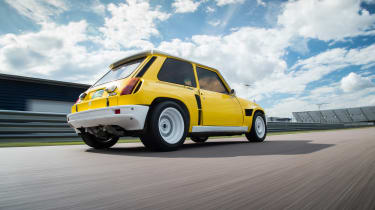 It’s so much more extreme to drive than the others. The noise, the explosive power delivery, the ultra-tight gear ratios and the sharper, grippier chassis making even Campbell’s car feel as mild as a cup of camomile tea. Such is the grip, there’s little sense of the rearward weight bias, even though there’s a far keener rate of turn-in response. On the tight twists and turns of a mountainous tarmac rally stage, I’m sure the added agility and power (around 300bhp, according to Taki) must be an explosive combination, albeit one that takes immense concentration and physical effort to stay on top of. Even with all this grip, in the heat and dust of a flat-out rally stage I’m equally sure it would bite if you misjudged a tightening corner or caught a patch of unseen gravel. The sting in the tail.

The noise is mighty – that characteristic hollow-sounding Group B blare that hardens as the boost builds, then pops and bangs with a fusillade of gunshots as the throttle is snapped shut. It’s almost impossible to believe that this small-capacity four-cylinder engine – just 1397cc – can generate so much sound and fury, but then you recall that when this car was at the cutting edge, this is what turbocharging was all about: fire and brimstone, not flat, featureless plateaus of torque and micromanaged boost pressure.

Taki speaks about as much English as I do Greek, but as I switch off the engine and climb out of the car, my face glistening with sweat and my hands quivering mildly with the adrenalin rush, we exchange a smile that speaks volumes. Were we able to discuss the experience of driving his car in a common tongue, I suspect it would be mostly in words comprised of four letters and unsuited to the pages of evo. Yet despite all this, when it comes to Renault’s most compelling road car, I’m pleased to confirm it’s that magical five-letter word that still packs the biggest punch: Turbo.