Pre Audi quattro, the Renault 5 Turbo was one of the maddest, baddest hot hatches available 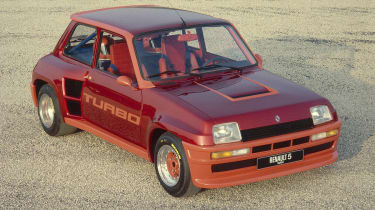 By the middle of 1976, Lancia was well on its way to claiming its third consecutive World Rally Championship manufacturers’ title with the fearsome Stratos. Prior to the Stratos’s arrival, it had been Renault who had topped the manufacturers’ table with its Alpine A110, but that car could trace its roots back to the late ’50s, so it was little surprise that it was immediately outclassed by Lancia’s purpose-built machine.Now Renault wanted revenge…

But to be competitive it would need a new model, one that could be developed into a true rival for the Ferrari-engined Lancia. Jean Terramorsi, Renault’s vice-president of production, outlined his requirements. To keep costs down, the new car should be based on an existing production model. It should also be small, light and nimble, and require only minor modifications to change from road-going trim to full rally spec.

The answer came from Bertone’s Marc Deschamps, who penned a radically reworked version of the Renault 5 supermini, with the engine mounted not at the front but centrally (like the Stratos’s), driving the rear wheels rather than the fronts. Terramorsi loved the idea and immediately gave the go-ahead for a prototype to be created. Sadly he was to die of a heart attack later that same year, but his successor, Henry Lherm, shared his passion for the idea of a mid-engined 5 and ensured that the project went ahead as planned.

With the company’s Renault Sport division busy with Le Mans commitments, it was initially a team of just four engineers who set about creating the first ‘Project 822’ prototype in a small workshop at Renault’s Alpine facility in Dieppe. At first the plan was to build the car around a spaceframe chassis, but this solution proved to be too complex – and therefore costly – so instead a hole was cut in the rear floor of the 5’s monocoque and a tubular frame constructed to support the engine and transmission.

A number of engines were considered. The 2664cc V6 from the Renault 30 was dismissed for being too heavy and unnecessarily complicated for rallying; the 1995cc in-line four from the 20 TS was too long to fit. A turbocharged version of the Alpine A110’s 1.6-litre four would have been ideal – Renault was about to pioneer the use of turbos in F1, so could use its knowledge in this field for the new road and rally car – but once this engine’s capacity had been multiplied by the equivalency factor of 1.4 it would push the car out of the 2000cc class and into the 2500cc one, where a heavier minimum weight requirement (945kg vs 845kg) wouldn’t play to one of the new car’s strengths. That left the 1397cc unit from the Renault 5 Alpine hot hatch (known as the Gordini in the UK). Using a modified Lancia Stratos as a testbed, work began on increasing its output from a normally aspirated 93bhp to a turbocharged 162bhp.

Wearing bodywork restyled by Marcello Gandini at Bertone, prototype 822-01 ran for the first time on March 9, 1978, at a circuit near Dieppe with director of Renault Sport and former racing driver Gérard Larrousse at the wheel. There was still work to be done – the suspension, which had come from the Group 2 Renault 5 Alpine rally car and the Alpine A310, needed to be fine-tuned, more weight had to be lost (aluminium would eventually be used for the bonnet and doors) and a Group 4 competition version would need to be developed – but the prototype proved the concept would work, so the new car, to be called simply the Renault 5 Turbo, was given the green light.

Production began at the Alpine factory in May 1980, and, by temporarily sidelining production of the Alpine A310, the 400 examples needed for Group 4 homologatation were built in time for the Turbo to make its official WRC debut just five months later, at the Tour de Corse. A first win soon followed, at the opening round of the 1981 season, the Monte.

The arrival of the four-wheel-drive Audis Quattros and the Group B cars meant the Turbo enjoyed limited success thereafter, but one of the most gloriously mad hot hatches had already earned its icon status.