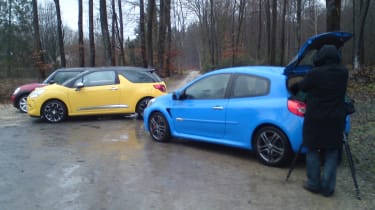 Nothing excites me like a good road trip, so when the new Citroën DS3 required some rivals just north of Paris for last month’s hot hatch group test, I jumped at the chance to head down there in the Clio. Unfortunately, my trip began in London, which could mean only one thing: congestion. Town traffic is not the Cup’s natural habitat. Its high-end power may be integral to the 200’s rev-the-nuts-off-it hot-hatch character, but it makes for hard work in town, where you find yourself constantly shuffling up and down through the gears. The stiff Cup chassis is also far from ideal when negotiating rough urban roads.

So leaving the Big Smoke for the Eurotunnel was a relief, though when I emerged France-side it was late and I was tired. I had thought the excellent French motorways would have me at my hotel in double-quick time, but an erratic sat-nav decided to take me to my destination via some seriously beaten-up country lanes.

It was time to unleash the Clio’s blistering back-road pace – and enjoy one of my best drives in a long time. Everything that makes this car annoying in the city brings it to life away from it. It was 1am, the weather was appalling, but I had a huge grin on my face.

And the Citroën? ‘You can fling the DS3 along with less effort than a Clio 200 demands,’ reported John Simister when he first drove it. That proved true, and the DS3 would no doubt take on London with greater panache, too. But for sheer fun on proper roads, it doesn’t get close to the Renault.