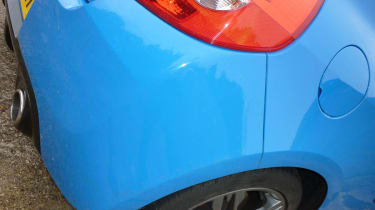 Averaging 2000 miles a month in a car increases the chances of it picking up the odd ding, but even so, with the Clio Cup due back at Renault, I was rather gutted that it had three separate blemishes on its bodywork in need of some attention. So off it went to the nice chaps at ChipsAway in Northampton (tel. 0800 145 5118) to make its Racing Blue paint perfect again. First off was some work on the driver’s side panel around the fuel cap. This ‘boasted’ both a four-inch scratch (picked up from some oik keying it outside my house) and a small dent (presumably from someone opening a door onto it in a tight car park). Both equally annoying as neither were my fault. Never mind, though, as the main picture shows, the panel is now clean – the scratch was filled and then flattened back (to make the panel smooth) and the filler was then sprayed with primer before being painted body colour and then lacquered. ChipsAway can mix any paint colour using the manufacturer’s colour code, normally on a sticker inside the driver’s door. The small ding was teased out using rods, leavers and dollies behind the panel, once some interior trim had been removed. Finally, some work was needed on the bumper. A cocked-up reversing manouvre had seen an 18in area heavily pitted (thanks to a small concrete bollard), the damage looking pretty nasty after 11 months of cleanliness. The gouges were filled with plastic filler then flattened down, before more priming, painting and lacquering to make the Clio look good as new. Some top service, for the grand total of £230. The service was nice and quick, too. Click here to head to the ChipsAway website