Renault has confirmed that the new turbocharged Clio Cup racer will making its racing debut in March. Details and pictures here 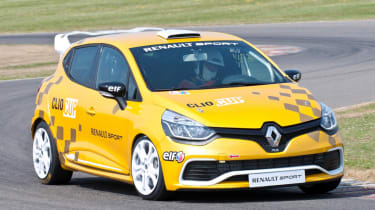 Renault has confirmed that the latest generation Clio Cup Racer, based on the 2013 Clio 200 Turbo, is ready to compete in the next championship – coinciding with the 2014 BTCC season.

There are currently 15 confirmed racers for the 2014 season, with many of last season’s competitors returning to the scene, although Renault has confirmed that it is still taking orders for cars. The 1.6-litre engine is largely unchanged, with a slight power boost to 217bhp, but the biggest difference will be the addition of a six-speed sequential gearbox. Adjustable Sachs dampers and revised aluminium wishbones tighten up the chassis on track.

The new 1.6-litre racer will be on show at the Autosport International show next this month, ahead of the first race in just over three months time at the Brands Hatch race track at the end of March.