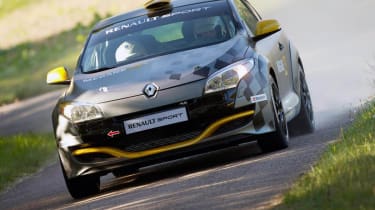 Renault has announced a rallying version of its Renaultsport Megane 250, the N4. The £48,250 Group N rally car is a serious piece of kit aimed at private drivers and teams. That’s just £25,000 more than the standard RS Cup for something motorsport-ready.

The standard Renaultsport’s 2.0-litre turbocharged engine’s electronic engine control system has been developed and enhanced by Cosworth Electronics, meaning power has leapt from 247bhp to 261bhp (available from 4000rpm), and torque from 251lb ft to a mighty 347lb ft (at 3000rpm).

The N4 is fitted with 355mm-diameter discs and four-piston one-piece callipers at the front, and grooved discs, taken from the standard production model, fitted with double-piston fixed callipers at the back. To help with hairpins and Ken Block-style tomfoolery, a vertical lever-operated hydraulic handbrake has been added.

To optimise performance on special stages, the air intercooler can be sprayed with water. The car’s gearbox is equipped with a self-locking limited slip differential, and allows for some ratio fettling depending on an event’s requirements.

Created in 1982, Group N is the category that has cars that are closest to production models. In order to compete, more than 2500 units must be produced over 12 consecutive months. Only minor modifications can be made to the engine compared to the production version.

Renaultsport is no stranger to making motorsport-inspired road cars, too. In 2008, it made the slightly berserk yet brilliant Megane R26.R, complete with roll cage, a couple of bucket seats and not a whole lot else. What chances an N4 for the road, then? A more hardcore Renaultsport Megane has certainly been rumoured…

Click here to read about our long-term Renaultsport Megane 250