First image, and short video, of the Renault Alpine A110-50 concept car leaks ahead of its Monaco Grand Prix debut 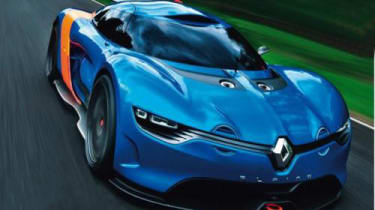 Renault’s revival of the famous Alpine brand will advance another step with the unveiling of a coupe concept at the Monaco Grand Prix this weekend. And the A110-50 appears to have leaked early, one image - which is believed to show the concept - appearing online. It’s intended to mark the 50th anniversary of the iconic Alpine Renault A110 Berlinetta, hence the name. The sleek coupe takes clear styling inspiration from the Renault Dezir concept from the 2010 Paris Motor Show. Underneath the dramatic bodywork, the running gear for the A110-50 originates from the Renault Megane Trophy racer. That means a rear-wheel drive tubular chassis and a mid-rear mounted 3.5-litre V6 engine with 400bhp.  Any further details can only be speculated currently, with no clues on when a production Alpine could appear. However, with the coupe market set to expand soon (the Jaguar F-Type, Alfa Romeo 4C and Honda NSX are undergoing testing to name just three), the A110-50 is likely to face stiff competition wherever it is pitched. However, the Alpine name is being promoted by Renault as a premium sports sub-brand, so expect an approach that is less uncompromising than the existing Renaultsport models. Keep your eyes on evo.co.uk following the Alpine A110-50’s Monaco unveiling on Friday for full official details.

UPDATE - Since the first image leaked yesterday, Renault has released this short teaser video of the new A110-50 concept: