Official pictures and details of the reborn Renault Alpine, the stunning 395bhp A110-50 concept car 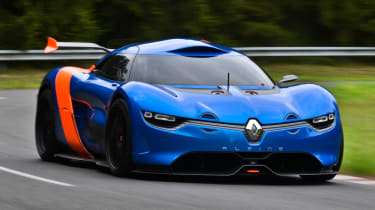 Renault’s Alpine concept car has been officially revealed. The Alpine A110-50 is a striking thing, its carbonfibre bodywork displaying a new shade of ‘Alpine Blue’. Despite its bold and futuristic look, based on 2010’s Dezir concept car, the A110-50 features a host of retro nods to the car whose 50th birthday it celebrates – the 1962 Alpine A110 – right down to a yellow hue for its LED lighting. The A110-50 shares its mechanicals with the Renault Megane Trophy racer, though the Dezir’s lower ride height has called for some tweaks. Its 2.6m wheelbase is identical to the Megane, though the Alpine has wider track widths and the 395bhp/311lb ft 3.5-litre V6 engine gets specific parts, including a new exhaust system. The engine is mid-rear mounted, and drives the rear wheels. It utilises a six-speed semi-automatic sequential gearbox, which slots longitudinally behind the engine and incorporates a mechanical limited-slip differential. With the Alpine weighing 880kg – endowing it with a 456bhp/ton power-to-weight ratio – performance should be pretty startling. Motorsport heavily inspires the Alpine, which boasts a tubular chassis, highly adjustable double wishbone suspension (with Sachs dampers) and a total lack of driver aids. The concept’s bold front splitter and rear diffuser generate ground effect, and account for a third of the car’s downforce, while the other two-thirds comes from the unsubtle rear wing. Despite all of this, the A110-50’s 21in wheels are wrapped in Michelin road rubber. While clearly a bold mission statement for the return of Alpine, a car inspired by the A110-50 concept could make production – though it’ll be around three years away. We’re firmly crossing our fingers.