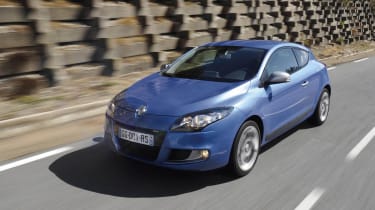 Those with longer memories will recall the minor cult that was the ‘warm hatch’. In response to rising insurance and petrol costs in the early ’90s, a raft of sub-hot hatches came along offering sporty styling and a background flavour of performance. We’re talking Clio RSI, Citroën ZX Furio and Astra SRi.

In an economic climate not dissimilar to the early ’90s, it’s of little surprise that the warm hatch is back – say hello to the Renault Mégane Coupe GT TCe 180. The fact that Renaultsport has had a hand in its development – we’re huge fans of both the RS Mégane and Clio – means there’s reason to be optimistic about this car, too. It even looks good, individual and stylish, riding on its 18in, graphite-coloured ‘Jetow’ wheels.

Inside, Renaultsport-spec seats are fitted with specific GT cloth and there are aluminium pedals, a Renaultsport wheel and polished carbon trim. Climate, cruise, TomTom satnav, and a hands-free keycard are standard.

It seems odd that a funky-looking three-door hatch with 178bhp should be considered a warm hatch, but thanks to the phenomenon of upsizing that’s what we’ve got here. With 0-62mph taking 7.8sec and a top speed nudging 140mph it’s on the hotter side of warm, and such is the amount of torque available at low rpm (221lb ft at 2250rpm), the GT makes a fine cruising and overtaking companion.

It steers with precision, but lacks a little of the weight and feedback of the full Renaultsport version, and it grips and contains body roll in a perfectly acceptable manner. The only unruliness comes from torque-steer, which is present under hard acceleration in the first three gears. The GT doesn’t try too hard to impress, which makes you wonder if this is one of those cars that reveals its talents slowly during the ownership experience rather than on a short test drive at a dealer.

It’s a likeable car, then, but it has one problem – its brilliant big brother. The full-on Renaultsport Mégane is a couple of grand dearer, but it is worth every extra penny.