First hot version of the new Megane is here, but does it hit the spot like the car it replaces? 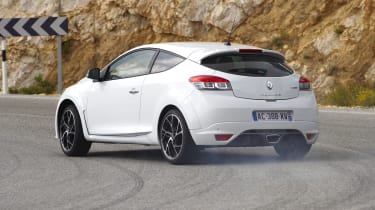 There’s a Clio in Car of the Year. We hoped there would be a Mégane 250 too, but it wasn’t to be. Maybe that’s just as well – I have a sneaky feeling that in the battle of the hot Renaults the Mégane would have come off second best.

Don’t get me wrong, the Mégane 250 is a good hot hatch, but a great one? I’m not sure. Maybe it’s just that it’s not quite the car I expected it to be, or perhaps that in true Renaultsport fashion the first version of any new model tends to be a bit iffy. Clio 197 or Mégane 225, anyone?

> Click here for our review of the Renaultsport Megane R26.R here

The first reason is actually the more likely. It feels like Renault has modified the sporty Mégane’s angle of attack, nosed it a fraction towards the mainstream. This wouldn’t be surprising; led by the mk6 Golf GTI, the hot hatch class seems intent on becoming all things to all drivers, with cars so polished that much of the texture has been worn away. 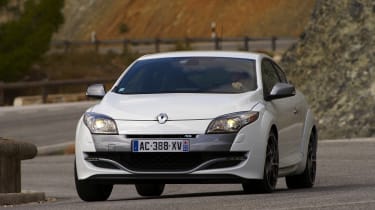 Of course, obedience to this philosophy isn’t compulsory – the Focus RS sits on the other side of the fence (and quite a long way out into the field) and so did Renault’s Mégane R26. But the 250, even in Cup spec, feels like a straddler, trousers snagged on the barbed wire. It has the hardware of the hardcore, but the polite demeanour of the straight-batters.

As with the Twingo and Clio, there are two versions to choose from. The £22,995 Sport, sharing acreage with the Golf, is softer and better equipped (keyless go, climate control, electric leather seats, etc). The Cup is £1000 less, unloads most of the fripperies (but still has cruise, Bluetooth and parking sensors) and replaces them with a comprehensive dynamic upgrade package. There are bespoke dampers and chunkier anti-roll bars, spring stiffness is up 35 per cent at the front, 38 at the rear, the Brembo brakes gain grooved discs and red calipers, a slippy diff is slotted in and there are even different tyres: Michelin Pilot Sport 2s instead of Dunlop Sport Maxx TTs. Shell out an extra £500 for the optional 19in wheels (which all the launch models were on) and you get Continental CSC5s.

In the interests of having your cake and eating it, the Cup mods can also be added to the Sport for an extra £1950, which gets you all of the above plus Recaro front seats that standard Cup owners will have to shell out £850 for. All models gain the ‘PerfoHub’ front suspension design, which separates steering axis from damper travel to minimise torque steer (just as it did on previous Renaultsport Méganes), and there are a number of other upgrades over the ordinary Mégane coupe too. A new front subframe design brings a threefold increase in stiffness, beefier damper housings and shaft diameters double strut strength, and the rear torsion beam now has a closed cross-section to minimise flex. These are extensive, expensive engineering upgrades, the sort of lengths that only Renaultsport – and perhaps Ford – go to.The first impressions behind the wheel are all positive. The cabin is nicely built, the driving position has been lowered 20mm and the gearchange has a tighter, more satisfying gate even if the lever is rather long. The brakes are truly superb, sensitive and precise but never grabby. It’s an easy car to get on with, its abilities hidden until called on to perform. 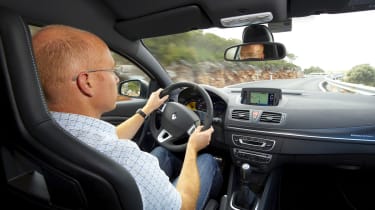 Good roads are practically guaranteed in this corner of southern Spain and we stumble upon a humdinger: wide, smooth and sinuous one mile (good for snaps), narrow with collapsed edges and lazy repairs the next (good for assessment). The Mégane masters it all. It’s immensely taut yet beautifully damped, and wheel control is exceptional – not once all day does the suspension crash, clonk or otherwise trouble the bump-stops. There’s no kickback through the steering column either.

On the smooth stuff the Mégane is blistering. Despite the fact that the front wheels have to deal with 65 per cent of the 1387kg kerb weight, they rarely feel pressured. You turn in, prepare yourself for body-roll that never arrives, and soon find yourself out the other side of the corner, knowing you could have nailed the power earlier. Start to work the front end harder and you realise how mobile, how active the rear is, but it moves so progressively, telegraphing its every move, that deploying it is second nature. On the rough stuff the Mégane is perhaps even more impressive. It never bites or snaps, it just serenely takes everything in its stride, utterly unruffled by quick progress. The Focus RS can’t pull off this trick.

And this is what separates the Mégane from the Focus. Driving the Ford is like being in a pub brawl as lots of rowdy components battle for dominance. The Renault is far more harmonious, with each component perfectly in tune with the others. It’s a more democratic set-up, far better to live with every day perhaps, but also less exhilarating. 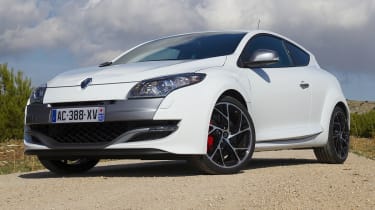 Two things could have helped make the Mégane feel more immediate: sharper steering and a better engine. The steering is smooth and very well weighted, and diff interference is practically undetectable, but for my money the electric set-up is not direct enough and feedback is lacking. The next day I drive a Sport and the steering seems better, as if it’s tuned into that car’s gentler responses, but for the Cup it should be sharper, helping make the car as agile and nimble as the chassis proves it to be. Stephen Marvin, Renaultsport’s technical director, later tells me that sticking with the 18s and Michelins would be his personal choice. ‘They’re more aggressive and also help sharpen up the turn-in a fraction,’ he says.

The engine is less than scintillating, too. I could live with the fact that it doesn’t feel that fast if it at least sounded enthusiastic, but the only aural enticement comes from the exhaust, which has been tuned to sound like the R26.R’s. More frustrating is the sleepy turbo, which doesn’t fully wake up until 3000rpm.

Part of the problem for the new Mégane 250 is that the magnificent R26.R, although now no more, casts a long shadow. Of course, this is a very different type of car but the comparison is inevitable. Moreover, I don’t think the new Cup has the sparkle of the outgoing R26. Yes, it’s undoubtedly better to live with and drives with real composure, but you have to dig deep to unearth this Renault’s treasure, namely its superb chassis and suspension set-up. And it’s that, as always with Renaultsport products, that lifts the Mégane 250 above the also-rans.