A reasonable price for a significant amount of power, but there are downsides 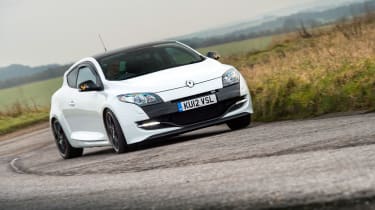 It said much about the talents of the Mk3 Renault Sport Mégane that even as it reached the end of its production cycle, it could still see off the latest and greatest from Volkswagen, Honda, SEAT and BMW. But while it felt uncomfortable to mutter it about one we’ve loved so dearly, the advancing years had begun to show, even in 275 Trophy-R form. In a class where 300 horses are rapidly becoming the norm, it was starting to feel just a little breathless.

> Read our review of the Renault Sport Mégane 275 Trophy

Renault tuning specialist K-Tec Racing in Dorset may just have a solution, promising to easily overturn that performance deficit with claims of 360bhp and 420lb ft of torque from its Stage 2 kit – up from the 271bhp and 265lb ft of the latest factory Méganes.

The basis of the K-Tec Mégane’s drivetrain is unchanged; it still has a 2-litre turbocharged four-cylinder motor up-front and a six-speed manual gearbox. However the extra power means it can now accelerate from 0-60mph in an estimated 5.5sec and keep pulling to a top speed of over 160mph. A subtle improvement over the standard Mégane 27 Cup-S’s 5.5sec 0-60mph time and 158mph top speed. 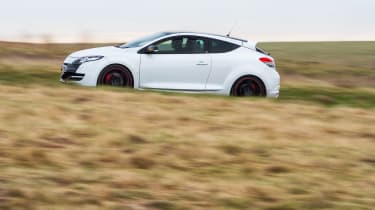 At the heart of K-Tec’s power conversion is a fundamental rework of the Mégane’s turbo. A larger billet compressor wheel and an upgraded turbine wheel have required machining to the turbo housing to make them fit. The turbine also has the back edges of its blades ground flat to reduce lag, while there’s a 360-degree thrust bearing and a stainless-steel heatshield, too.

Given the engine now runs with 1.8bar of boost, and therefore requires more fuel, new 630cc injectors are used, while the engine breathes through a KTR induction kit and a sports cat plus a full three-inch KTR exhaust system. There’s also a larger intercooler, and all these changes are controlled by a remapped ECU.

There are no nasty resonances from the new exhaust, and although the note is a little louder, I prefer its deeper tone to that of the titanium item that was a factory option. There are no holes in the mapping either, so driving in stop-start traffic elicits no awkward lurches or hesitations.

Nevertheless, this isn’t additional power by stealth because the induction kit that nestles under the scuttle whooshes, chirps and sneezes like an old Group A Ford Sierra Cosworth. It’s amusing at first, but could become tiring after a while.

Unsurprisingly, deploying over 400lb ft of torque makes for a hatch that bristles with antagonistic energy, one that not only rips through the mid-range but also carries on pulling ferociously to the red line. 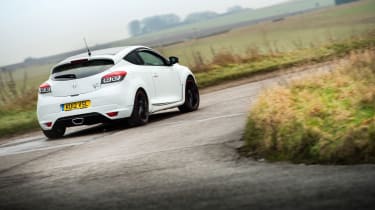 If there is a downside – in the sub-zero temperatures of our test, at least – it’s that it’s hard to put that power down cleanly in second gear, so I soon fall into a rhythm of using third gear and above. Third has tremendous reach, but the more gradual build-up of boost also gives the front wheels a greater chance of finding traction, even if it does blunt the car’s response and partly undo the on-paper gains.

Get greedy with the throttle too early mid-corner and the nose now also pushes dramatically wide. Again, slippery roads don’t help, and drier conditions will doubtless calm the unruliness of the understeer.

In addition to the power upgrade this particular car has KW Variant 3 coilover suspension, although K-Tec also offers suspension options from Bilstein, Nitron and RSC. The Mégane sits lower thanks to its new suspension, and turn-in on corner entry is very direct, but the trade-off appears to be less wheel travel and the ride is busy over poor roads at speed. This ‘fast road’ setup does have enough initial pliancy to take the edge off the worst road scars and potholes, though.

The KWs offer plenty of adjustment, which probably means there’s a fine trackday setup to be found, but in its standard form the Renault Sport Mégane’s B-road dynamics are its biggest draw and personally we’d be reluctant to tamper with them.

The desirability of these upgrades hinges on where you intend to drive your Mégane the most, and how you derive the most pleasure from it. For a road-only car, I’d probably pass on the KW suspension, but the extra power puts this Mégane back at the forefront of the class for outright pace. 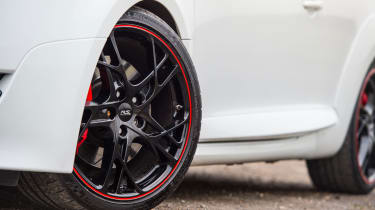 Budget on £4200 for the extra power, including fitting. It makes it great way to revitalize your Mégane and make it incredibly powerful for a reasonable amount of money.

If what you wanted was power and performance for not a huge amount of money, the excellent values of second hand Renault Sport Méganes mean that one with K-Tec Racing’s upgrades would make it exceptionally good bang-for-your-buck value.

The suspension, which doesn’t entirely improve the hatch’s on-road abilities, costs £2016 including fitting. But we’d recommend saving your money and keeping the chassis standard.

Revo’s modified Golf R produces just a bit more power than the K-Tec Racing Mégane at 371bhp, and with four-wheel drive its performance is even more useable. As it’s simply a re-map, Revo’s power upgrade is much cheaper at £719, however new and second hand Golf Rs are much more expensive than Renault Sport Méganes making the entire package a lot more.

> Find out what Revo's modified Gold R is like to drive