Ostensibly a brilliant hot hatchback, but tough and versatile rivals still prove too much for the latest Mégane RS 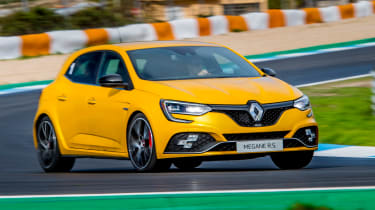 To be a Renault Sport is both a blessing and a curse for any new hot hatchback, as our expectations for all the new models from the boffins in Dieppe are always high. Icons like the Renault Sport Mégane R26.R and Clio Trophy redefined the capabilities expected of the simple front-drive hot hatch, and now a new Mégane RS with that same Trophy nomenclature has arrived, and with those same lofty expectations to live up to.

This is especially poignant with the latest Mégane, as on initial impression the current Mégane RS didn’t impress us like its stirring predecessors did. To substantiate its latest claim of class heroism, the new Trophy’s armament has been updated, combining choice upgrades from the standard Mégane RS such as the Cup chassis and upgraded brakes with a 20bhp power rise, bespoke lightweight wheels and new Recaro bucket seats that now sit 20mm lower in the cabin.

But it’s not unusual for Renault Sport to create its finest works at the end of the relevant model cycle, so has it just given us the Mégane RS we’ve been prepared to wait for a few years early? 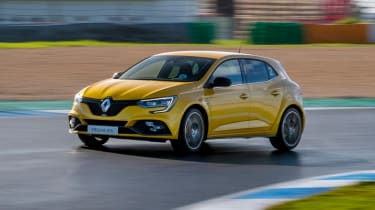 As mentioned above, the Trophy features the same Cup chassis that’s an option on the standard car, which combines a stiffer set-up of the usual MacPherson strut front suspension and a multi-link rear that features dampers, springs and anti-roll bars that have been stiffened by 25, 30 and 10 per cent respectively. Also included in this package is a Torsen limited-slip differential, which on the Trophy is mated with a six-speed manual transmission or EDC twin-clutch gearbox. Another option made standard are the hybrid cast-iron and aluminium grooved front brake discs that promise greater fade resistance and a reduction in unsprung weight of about 1.8kg per corner.

Making their debut on the car are Bridgestone’s Potenza S001 tyres, which are fitted to the new ‘Jerez’ 19-inch alloy wheels. Drivers planning to spend time on track can specify the similar-diameter ‘Fuji’ wheel, which is both 2kg lighter and wrapped in the track-focused Bridgestone Potenza S007.

Like the standard RS, the Trophy gets Renault’s controversial 4Control four-wheel steering. No physical or calibration changes have been made to this set-up, so you get the same electronic actuators that can turn the rear wheels up to 2.7 degrees in the opposite direction to the fronts, or up to 1 degree in the same direction – this changeover happens at 37mph in all modes other than Race, which switches at a much higher 62mph. 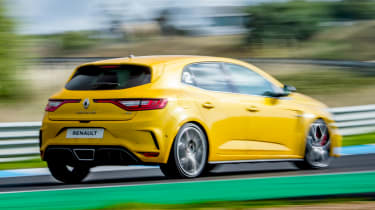 The biggest upgrades have been reserved for the engine and transmission, with the turbocharged 1.8-litre four-cylinder now delivering 296bhp – an increase of 20bhp. Torque is up too, with those cars fitted with the tougher EDC transmission getting 310lb ft, while the six-speed manual has 295lb ft. Most of the gains come from the use of a new turbo that boasts ceramic bearings to cope with its maximum boost speed of 200,000rpm. There’s also a revised exhaust system that now features an electrically actuated valve rather than the 280’s passive system. In Comfort mode it stays closed for a subtler sound, while Sport setting opens it at idle and again at around 4000rpm for a rortier soundtrack. Select Race and the flaps stay opened, boosting volume further and allowing the engine to breath better.

On paper the gains in performance are modest, for the manual car at least, with the 0-62mph sprint trimmed by just a tenth to 5.7sec, while the top speed is upped by 4mph to 162mph. Renault has yet to officially announce figures for the EDC car. You notice the extra mid-range wallop more than the top-end gains, the car pulling with real intent from as little as 2000rpm. Throttle response is sharp in Sport and Race modes, while the exhaust note is the right side of fruity when pushing on – although the barrage of pops and bangs on the overrun is a little ostentatious when you’re trying to make swift and subtle progress.

The manual transmission is a notchy affair, although the shift is very short and with more purposeful inputs relishes being rushed up and down the ratios. We’ve still to drive the dual-clutch transmission version, however it is a ‘dry-clutch’ transmission, which often lack the speed and deftness of ‘wet-clutch’ units found in rival VW products. 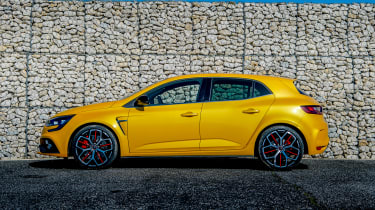 The Renault Mégane RS Trophy is not a car that you instantly jump in and mesh with. It takes a period of acclimatisation to make sense of its weighty controls and the bizarre interior ergonomics. Hop into a Golf R and within 500 yards most will have a handle on it, but persist with the Mégane and there is real talent within the chassis.

The first thing that hits you on the move is that this car is properly firm. The Cup chassis might not be bespoke to the Trophy but it’s almost punishing at low speeds, crashing into sharp intrusions in the road. Build your speed though and everything starts to come together as the ride doesn’t soften, but just locks the Mégane’s body right down onto the road, with an impressive damping quality when lateral loads increase. Like the standard RS, the Trophy also features innovative hydraulic bump-stops, but so well calibrated are the dampers you never really need them. 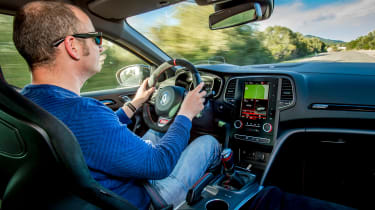 On even the most lumpen back roads the body stays flat and completely locked down, the chassis’ core stiffness allowing the suspension to soak up undulations without knocking the body offline. All of the Mégane’s control interfaces that challenge at low speed make perfect sense when on the open road, without an ounce of slack and instilling huge confidence in the Mégane’s considerable capability.

That said, the lower seating position isn’t really all that noticeable, while at lower speeds you get a slightly strange feeling from the rear axle, as if it’s operating a fraction of a second behind the fronts. Push a bit harder and it feels better, although it’s still a car that doesn’t quite feel natural. There’s bags of turn-in bite, yet also the strange sensation of the rear of the car rotating quickly and in a manner that has you thinking you’re starting to slide. In fact, it’s the rear steering doing its thing and pointing the nose into the apex to give you a cleaner, straighter exit. It feels odd at first, but calm your inputs and learn to trust that the considerable grip is there and the Mégane will obliterate a series of corners with unfettered speed and clinical precision.

On a wet but drying Estoril circuit the Bridgestone S007-shod cars (examples used on the road routes have the S001) are a mixed bag. When the conditions are at their wettest, and the car in ESP-disabled Race mode, the Renault feels like it wants to oversteer into every corner, the transition from grip to slip fast and spiky, with multiple corrections needed to keep things on track – it feels as if the rear steer struggles to fully comprehend what is happening. With drier conditions and heat in the rubber the Renault clings on tenaciously, slicing through corners fast and flat, the LSD keeping the nose locked on your line even when full throttle is applied. The brakes are fairly effective with a firm pedal, but there is some grumbling towards the end of each three-lap stint.

Pricing in the UK starts at £31,810, which is the higher end of hot hatchback pricing for the class. As mentioned above, there are plenty of changes to justify the £2815 jump in price over a RS 280 fitted with the Cup chassis.

Coming in at £31,525 is our current favourite, the Honda Civic Type R, which with 316bhp is even more powerful than the Renault. GT trim costs an extra £2000 and adds items such as satnav, wireless phone charging and parking sensors. Both versions are hugely fast, capable and engaging.

Less powerful than the Mégane but equally focused in its approach is the £28,760, 271bhp Hyundai i30 N Performance. It’s well-equipped and has a virtually limitless combination of driver modes. It’s also a hoot to drive.