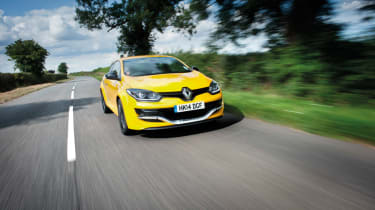 This, the 275 Trophy, is a more user-friendly version of Renaultsport's Nürburgring-focused hot hatch, the Trophy-R. It mixes the firepower of the R with the usability of the regular 275, to become one of the most capable and well-rounded offerings in this segment.

The 275 Trophy sits on 19-inch Turini Speedline wheels, and it's also available with optional adjustable Öhlins dampers and Allevard composite springs. Our test car doesn't have these - it's suspended on the regular Renaultsport items - but any concerns that these aren't up to the job will be quickly quelled, as you shall soon find out.

For those wondering, the trick suspension our car doesn't feature comes from the Trophy-R, which is the full-on, limited-edition, son-of-R26.R, roll-cage, Cup tyres car that set a nifty 7:54 lap record around the Nordschleife. Just 30 are headed to the UK, so this, the regular Trophy, is far more accessible. It's also far more practical, as it features rear seats and an updated infotainment system - things the R does without. 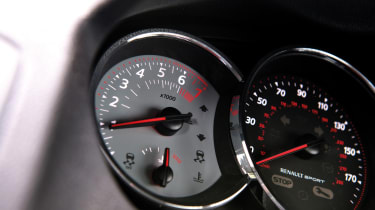 The 275 Trophy is both sharper and more powerful than its predecessor, the 265 Trophy. Power's up from 261bhp to 271bhp (at 5500rpm), but torque remains the same - it peaks at 265lb ft between 3000 and 5000rpm. It takes a claimed six seconds to reach 62mph, and top speed is a quoted 158mph. The car's six-speed manual gearbox is unchanged, but that added oomph makes it feel noticeably more eager once rolling.

By the way, the Trophy's drivetrain is identical to those found in the red-blooded Trophy-R and regular 275.

My favoured route to and from evo Towers is a mixture of roads and surfaces with a preponderance of lumps and bumps that I have come to know pretty well over the years. Even the two sleeping policemen that I encounter have familiar degrees of severity. The Mégane 265 was certainly one of the firmer cars on that route, and much as I loved its single-minded attitude in placing precision and performance over plushness, I did wonder how many people would be forced to choose a Golf GTI instead, purely to hush the complaints of passengers. It is, after all, a hatchback and therefore likely to be purchased and used by families.

The 275, however, is less compromised. The change is subtle, but others have noticed it too. The ride is still firm and superbly controlled, yet the edges have been taken off so that it no longer feels as harsh and unforgiving. The power increase feels greater than 10bhp too, the Mégane ripping through its relatively short gearing with real intent and giving the front axle plenty to think about. Down the bumpiest stretches of B-road the nose is inclined to wander slightly with cambers under full throttle, but it’s only enough to make you grip the Alcantara wheel a little tighter rather than make you back out of the throttle. 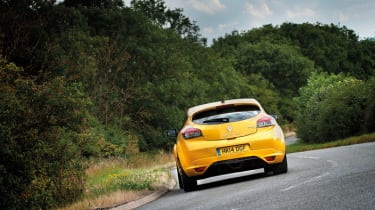 What’s trickier to get used to is the activation of the limited-slip diff. We’ve always been full of praise for the diffs in the snouts of hot Méganes, loving the aggressive way that they tighten the line in a corner, pulling you through with supreme traction almost from before the apex. Initially, however, the 275’s front end seems almost too eager when the diff locks up, resulting in an almost alarming veer towards the inside kerb. It isn’t so much of a problem if you’re driving in a more committed fashion and have the suspension really loaded up, but at six-tenths it can be a bit alarming. The solution lies in the Renaultsport Monitor, which displays all sorts of graphs, dials and times on the dash-mounted screen and also allows you to change the throttle map. Switch it to a linear map and you acquire much greater finesse over the power delivery, which in turn makes the diff’s reaction more progressive and pleasing.

Overall, it’s extremely hard to fault the 275 Trophy. It even sounds more appealing than the 265 thanks to the new Akrapovic titanium exhaust, which adds a bit of growl on the way up the rev range and some overrun pops on the way back down. The steering could perhaps be a smidgen tighter immediately off-centre, the touchscreen is too hard to reach (even with my long arms) and I’m not sure the Recaros hold you quite as securely as you need given the cornering forces encouraged by the chassis (the R gets huggier buckets), but these are minor niggles given the rest of the car’s talents.

I want to try the Trophy-R soon, because it should be fantastic. But for now it’s good to know that even if you can’t get your hands on one of the 30 Rs coming to the UK, or if you actually need back seats, or if you simply don’t have another £7500 to spend, then the standard Trophy is still a quite brilliant hot hatch.

The Mégane Nav Trophy (as it's called in full) starts at £28,930. This is £3,005 more than the regular Mégane Nav, but a substantial £7500 less than the extreme, track-biased Trophy-R with which this shares much of its chassis setup (you can even option in the R's track-focused dampers and springs).

The latest, updated 275 Trophy's spec is good too: the Mégane gets Alcantara on its seats and steering wheel, satnav, climate control and keyless entry as standard. And an Akrapovič exhaust helps to more effectively project the car's 'blast furnace' voice note into the cabin. 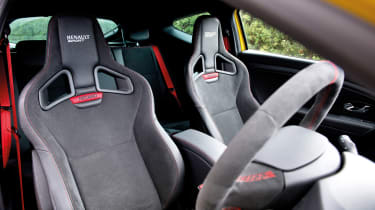 A key rival that's currently hogging the hot hatch limelight is the Honda Civic Type R. Though its substantially more powerful - it's turbocharged 2-litre engine produces 306bhp and 295lb ft of torque - and far more striking in its design, the Mégane still edges it for dynamic adjustability.

The Civic currently holds the front-wheel-drive lap record at the Nürburgring - it beat the more hardcore Mégane Trophy R's time by over four seconds - but our tests on the more technical layout of Bedford Autodrome's infield (where power is less important) suggest that both the R and the more user-friendly Trophy are slightly faster than the Civic. The Civic's quite a bit more expensive too, starting at £29,995.

Another 'Ring-focused rival is the SEAT Leon Cupra 290. It's 15bhp up but 7lb ft of torque down on the Renault, and can reach 62mph three-tenths faster. It's not set to arrive until later this year, but we're expecting it to build on the playful, throttle-adjustable setup of the outgoing 280. Expect this to bring the fight very close to the 275 Trophy.

Then there's the Focus ST and VW Golf GTI. Both are arguably more rounded than the Mégane, but for driving thrills alone, the French car comfortably leads the way. 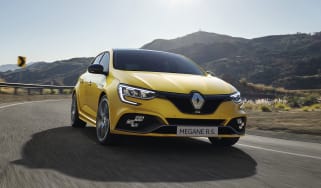