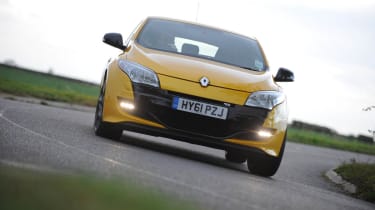 The Renaultsport Megane’s 2-litre turbocharged petrol engine is more potent. The boost is wound up to 2.5bar and there’s remapping to suit, liberating an extra 14bhp and 14lb ft of torque. Renault’s engineers have seen fit to leave the RS250’s excellent chassis alone, the introduction of Bridgestone RE050A tyres to new 19in, red-rimmed black alloy wheels the only dynamic change. 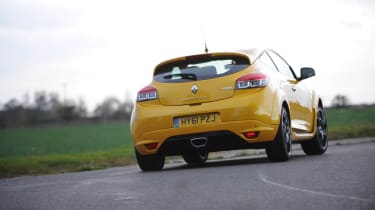 The upped power and torque figures feel as subtle as they look on paper, the extra shove smoothed off by the turbo’s progressive delivery and the six-speed manual gearbox’s relatively long ratios. But the Renaultsport Megane has never wanted for speed, and with little lag to its power delivery, pace is very, very impressive. There’s noticeable torque-steer out of tight, low-geared corners but it’s minimal and well contained, doing little to detract from the Megane’s lightning progress.

The ride is very firm, most notably at low speed over rougher urban roads, but it’s got a more supple edge than most rivals, and it’s at higher speed across more twisty, interesting tarmac that this car feels at home. Its steering could benefit from a little more feel, but is very precise, and there’s enough feedback to give you the confidence necessary to drive the Trophy very quickly. The amount of grip it finds and the lack of understeer, no matter how hot you pile into a corner, are unmatched in the large hot hatchback class.

If you liked the Darth Vadar-like soundtrack of the Megane R26.R, the sound of a Trophy on full throttle will please you too, with its mechanical growl pretty much drowned out by a sucking induction noise. 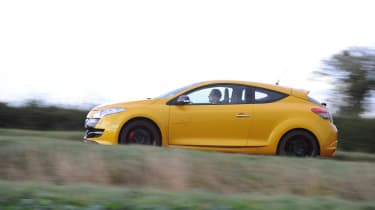 A Megane 250 specced up to Trophy levels (though without the extra power, exterior graphics and exclusivity) ends up costing £27,220, which makes the Trophy look pretty good value for what it offers. The Trophy’s nearest rival is the Volkswagen Scirocco R, which also puts 261bhp through the front wheels and boasts equally svelte coupe-like styling, costing a pricier £29,745.

It’s almost homologation special-like, this Megane, the 500-off road car being the result of Renault successfully chasing the front-wheel-drive lap record of the Nurburgring. Its 8min8sec lap beat Renault’s own Megane R26.R by nine seconds, and should ensure the honours stay in France for a little longer.

The all-new Ford Focus ST and Vauxhall Astra VXR are likely to come hunting soon, though. 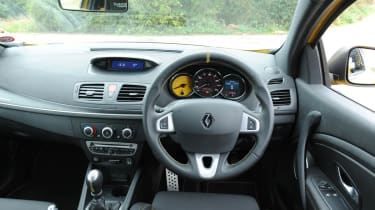