The Renaultsport Megane 265 Trophy was created to set a new front-drive road-car lap record at the Nürburgring. Here's the story of how it happened. 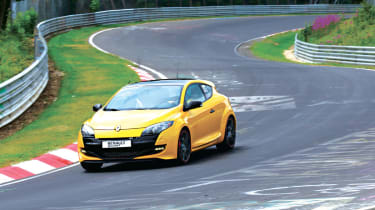 The Mégane is dancing, flicking balletically through the turns at the start of the lap, on the limit, carrying speed, preserving momentum. We swing into the awkward right-hander at Hocheichen and the inside wheels climb the kerb outrageously so that the car is almost two-wheeling, the throttle still pinned. I can’t help but giggle at the audacity of some of the lines Laurent Hurgon is carving. He hears my chuckle above the sound of tortured front tyres and on the next straight glances across. ‘OK?’ he asks. I give him the thumbs up.

Hurgon has the Trophy responding in just the way he wants at every turn: maybe a quick jab of steering off the throttle to get the tail loose in quicker corners, or trail-braking deep into tighter turns to get to the apex with the car pointing out so that he can pick up the throttle hard and early. Will the brakes and tyres last the 14 miles? At times the anchors go on so late and hard into downhill turns that I’m hanging off my belt as the Mégane gets all squirrelly. I know it sounds absurd but it’s like we’re still accelerating on the brakes, not losing speed (or time). We climb kerbs, clatter over brick-paved rumble strips, consistently on the limit, hitting every apex and never once snagging the rev-limiter. It’s a lap I won’t forget.

They say that the Nürburgring Nordschleife is not a circuit to take liberties with. Hurgon, development driver for Renaultsport, knows this well. Now the sun is out, ambient and track temperatures are high and the roar of the air-conditioning at full chat competes with the howl of tyres. Hurgon is having fun, showboating a bit, but it was quite different at 7.15am when he hustled the Mégane around to a new front-wheel-drive road-car lap record. The a/c was silent, the driving much less flamboyant and only a tiny GoPro video camera witnessed the ‘little moment’ that he had under the trees where a hint of dampness still lurked…

Once again, though, the Nürburg weather gods have smiled kindly upon Renaultsport. Yesterday afternoon it was chucking it down and a foggy dawn was promised, but flinging back the curtains at 6am revealed a crisp, bright and dry morning. Perfect – just as it was almost exactly three years ago when Renaultsport was here trying to break the record with the Mégane R26.R.

Back on June 28, 2008, the R26.R stopped the clock at 8min 16.9sec and smashed the front-drive record, lopping a massive 18sec off the previous best, set by the Ford Focus ST. And so it bloody well should have; the R26.R was a car stripped of weight and luxuries (such as rear seats), fitted with plastic rear windows and a half-cage, and shod with barely treaded Toyo R888s. Oh, and it had arguably the best hot hatch chassis of all time. Still has, come to think of it.

Against this backdrop, you’d think the prospects of the most potent new Mégane beating it were far from certain. As the 227bhp R26.R demonstrates, a good lap time here is more about handling than power. Then again, representatives of Europe’s media wouldn’t be here if a record-breaking run wasn’t on the cards; it’s a long way to come to drive a Mégane with a bit more power.

That’s essentially what the limited-edition, 500-off Mégane 265 Trophy is. There is no cage, there are no weight-saving measures – all the regular car’s fixtures and fittings are retained. There aren’t even any chassis modifications, unless you count the tyres, and they’re still regular road tyres, just a different make to the ones that normally come with the 19in rims that are part of the Cup chassis option. Yet this Mégane is, in its way, an homologation special. Not to the extent of an E30 BMW M3 or a Mercedes 190E Evolution but with the prize of the front-drive Ring record in mind.

The Mégane 250 was already close to beating the R26.R’s time. In mid-2009, just ahead of its launch, a small group of journalists was invited to technical briefings and rides in prototypes at and around the Nürburgring. It was explained how the new car was dynamically improved and there was also a strong hint that it might set a new lap record. It didn’t happen, but I did get a lap with a chap called Laurent Hurgon and was impressed with how neatly and speedily he piloted the Mégane.

Everything that has been changed on the Trophy has been changed with the intent of shaving time off the 250’s time around the 13-mile lap. The extra 14bhp, liberated by raising the boost a couple of points to 2.5bar with remapping to suit, gives the Trophy an edge, and so too do the tyres. These are fairly common Bridgestone RE050As, which Renaultsport’s tests have shown deliver the best dry-road grip and decent road comfort, too.

As you might expect with such subtle changes, the Trophy feels pretty much like the regular 250 Cup on the road. No bad thing, that. It’s firm-riding but with a supple edge, helped by the suspension being attached to what feels like a solid shell. Traction is very impressive and you’d never guess that there was a mechanical limited-slip diff influencing the drive because the front end simply feels brilliantly, cleanly hooked up – it doesn’t tug or weave even throttling hard out of tight, low-gear turns.

It doesn’t really put a wheel wrong, but having said that, it’s not the most engaging of chassis; it feels more effective and efficient than involving and engaging. There’s a strong self-centring effect to the steering, so it feels like you have to put more effort in than you might expect through a meandering section of road, and you hanker for a little more detail through the wheel at times. It’s not a very vocal engine either (the R26.R was just the same), with a fairly plain note at both the induction and tailpipe ends. I’m sure the extra power and torque are there but it’s an incremental improvement and so hard to spot. It will probably be a part of the mid-term Mégane range revisions due next year.

You don’t really rely on subtle chassis detail when you’re driving on a track, though – you want a car to turn the moment you make an input, accelerate in an instant and stop tirelessly. And if the chassis can get you onto the desired line and keep you there at the limit, a good lap time is in the offing. The Trophy delivers.

Dressed in black overalls, the diminutive Hurgon looked unassuming when we gathered in the old Nürburgring pits at a little past 7am for the record attempt. There was little preamble to his first run, and just a chirrup of the front tyres as he sped out onto the track, crossing the industry pool start line, followed by a greater howl as he pitched the Mégane into the first left-hander. When the large, digital-style display positioned at the finish line showed just after eight minutes, there was another howl of tyres and moments later the bright yellow Trophy re-appeared and stopped the clock at 8.09.64, prompting a ripple of applause.

Turns out that this was better than Renaultsport had hoped for; testing having shown that an 8.12 was probable. Hurgon wasn’t done, though. Knowing the track would get faster as it dried, about half an hour later he set off for another run. All eyes were on the digital display as the digits flicked over to 8.00 once more. We heard the sound of the Mégane’s tyres yowling through the final corners and then it burst into view again, tyres screeching, and this time the clock stopped at 8.07.97. Amazing.This time there was a proper, hearty round of applause and much back-slapping. A job well and truly done.

My turn to drive the Ring comes late in the afternoon, and the Trophy is a very impressive car from the off. The speed it will carry without feeling flustered and the grip it finds, especially under power, are quite something for a road car. I don’t have it swinging around to the degree that Hurgon did but I’m confident enough to turn the ESP off for my second lap. At one point it gets out of shape on the brakes from big speed, its tail gently kicked out a few degrees, like a MotoGP bike, but it feels comfortable with it, and so do you. It’s accurate and responsive but there’s a gentle edge to its handling, a lot of useful smudge, that makes it comfortable to drive quickly.

The irony is that Hurgon’s fast lap was much less extravagant than the demo lap, with more understeer than oversteer and much less kerb-taking. It’s the result of ‘at least 500 laps’ in Renaultsport Méganes, reflects Hurgon later. It’s a record that will stand for some time, I suspect. Or until Renaultsport gets round to making an R26.R-style version of the current Mégane. A front-drive production car lapping the Nordschleife in under eight minutes? It will happen.