The new, bigger Megane estate matches the hatch in terms of power and chassis tech 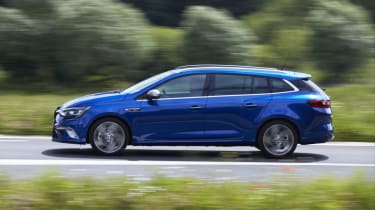 Renault has revealed an estate version of its latest Megane. Called the Sports Tourer, this new Megane is available with the same engines and chassis technology as the smaller hatch in a more practical body. Prices starts from £18,550.

The new Megane Sport Tourer can be bought in six different trim levels: Expression+, Dynamique, Dynamique S, Signature and GT Line as well as GT. The top of the range GT spec not only has the most powerful engine of the range, its 1.6-litre turbocharged engine produces 202bhp and 206lb ft of torque, but as with the Megane hatch GT, it has a seven-speed double clutch automatic transmission, launch control and four wheel steering.

The launch control and transmission in the GT allows the new Megane Sports Tourer reach 62mph in 7.4sec, 0.3sec slower than the smaller hatch, and the gearbox allows multiple down shifts to help you select the correct gear for a corner. If you hold down the left hand paddle as you brake into a corner the transmission will select the lowest possible gear for the speed you’re travelling.

The Sport Tourer GT has four different driving modes rather than the five available in the lower specification models. You can choose between Comfort, Sport, Neutral and Perso – the GT does without the Eco setting - and each mode can be selected via the Multi-Sense system except the sportiest setting. The GT Sport mode can only be accessed via the R.S. Drive button and changes the attitude of the engine and transmission while also sharpening the steering.

The four wheel steering in the Sport Tourer GT works in the same way as the similarly equipped hatch. To increase the car’s agility and maneuverability at lower speeds the rear wheels steer in the opposite direction of the front wheels by up to 2.7 degrees. Once the speed exceeds 37mph, or 50mph when the Sport Tourer is in sport mode, the rear wheels turn in the same direction as the front to aid stability by virtually lengthen the wheelbase.

As well as the GT’s 202bhp 1.6-litre three other engine options are also available, including two diesels and a petrol. The smaller 1,461cc diesel produces 108bhp and 193lb ft of torque and, when combined with a manual gearbox, can reach 0-62mph in 11.7sec. The more powerful 1.6-litre diesel produces 128bhp and 236lb ft of torque reaching 0-62mph in 10.6sec. The 1.2-litre turbocharged four-cylinder petrol engine produces the same power as the larger capacuty diesel but can’t match it for torque (151lb ft), resulting in a lower 0-62mph time by 0.4sec.

The 1.6-litre petrol is exclusive to the GT in the Sport Tourer range, however all of the other engines are available across the range including the GT-Line, which shares the same sport looks and interior as the GT.