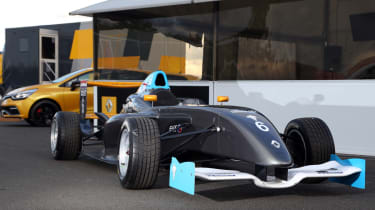 Renault and the British Automobile Racing club have established a new British formula for the 2014 session.  The chassis is from the existing Formula Renault series which is run in Europe, whilst the naturally aspirated 1.6-litre four-cylinder engine is sourced from the Renaultsport Twingo 133, producing a slightly higher 138bhp.

As well as hone their driving ability, Formula Renault UK 1.6 plans to focus on developing the drivers – aged 16-19 years old – in racing’s surrounding areas, including media relations and sponsorship attraction. Due to the young age of the drivers, the eight-event season (which will produce 18 to 20 races) will not take place during the GCSE exam period.

The relatively low cost of the series plans to encourage both privateers and teams to enter the sport, with the intention of bridging the gap between karting and higher-level single-seat racing.

To trial the 2014 season, organisers are hosting an ‘Autumn Trophy’ at Rockingham race circuit in Northamptonshire on November 2 and 3 to allow prospective drivers to gain experience with the car.